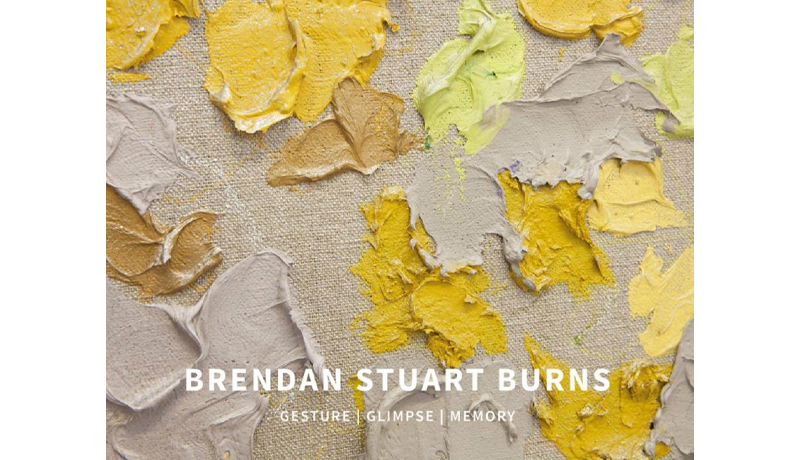 In past years we have hosted non-profit shows in January and offered the gallery to institutions to exhibit a selection from their collections. The idea was to show collections that would not normally be seen in London.

In January 2008 we hosted an exhibition of selected works from the Derek Williams Trust and the National Museum of Wales. The collection included a work by Brendan Burns, an established Welsh painter who we hadn’t come across before. His piece consisted of 12 painted panels, each specifically related to one of Debussy’s 12 Preludes, equally inspired by Ceri Richards’ sketchbooks and through these, to La Cathédrale Engloutie, (The Sunken Cathedral), the tenth of Debussy’s Preludes for solo piano. These 12 works hung opposite my desk in the gallery for three weeks of the exhibition, thus I became very familiar with them and their quiet, contemplative mood. At the end of the show they went back to Cardiff and so too did Brendan Burns, not to be heard from for over five years!

In early 2013 I received an email from Brendan, reminding me who he was and saying he’d like to show me his new book Glimpse. A month later he visited the gallery with the book. I was hugely impressed by what he’d been doing in the intervening years, all beautifully illustrated, and even these flat pages exhibited a quality of touch, colour and texture that captured my interest immediately.

Later in 2013 I visited his studio in Cardiff, above a pensioners’ day centre in a converted church. The studio, though neat and tidy, was filled with paintings, drawings and ceramics. Spoilt for choice, I selected a group of works for the 2014 London Art Fair in Islington. We sold five paintings at the fair, followed by many more from the gallery, Masterpiece London and, most recently, at Art Miami. Buyers were from the UK, Far East and USA, so a universal success.

Brendan Burns’ paintings reflect his intimate study of the seashore rock pools, lichen, the sand and pebbles, the powerful sensation of the rhythm of coastal tides and winds and the erosion caused, the shimmering light on the spindrift bubbles of the sea and the vegetation along the shore. All are thoughtfully observed, drawn, photographed and sometimes, pressed onto the landscape or rock crevices are prepared sheets of porcelain that are later painted and fired and become rectangles or ribbons of delicate ceramic shapes. All these constitute Burns’ subject, the ecology of the Pembrokeshire coast that also fascinated esteemed predecessors such as Graham Sutherland and John Craxton.

These works have an understated power and energy; there is a calmness about them, the heavy impasto creating an almost sculptural density to the canvas, spontaneous yet applied with confidence, coupled with an intense discipline that results in a harmonious and uplifting outcome.