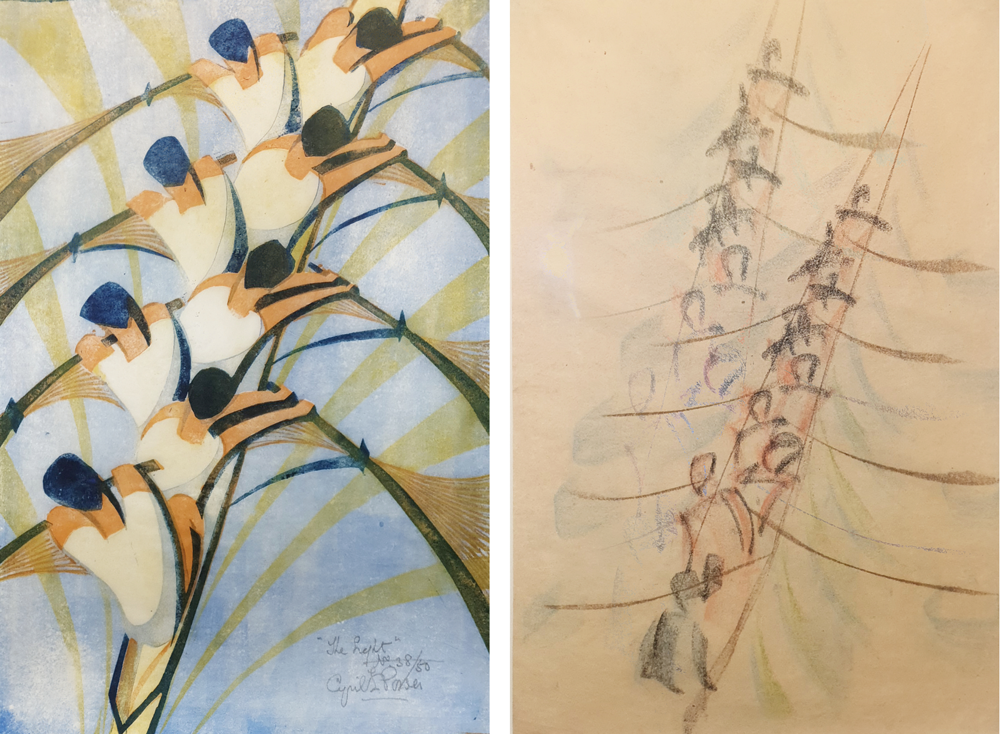 During these very challenging times for all of us we thought we’d produce a weekly ‘Staff Favourites’ that we could share through Social Media and our own website.

Many of you May know that during June to September last year Dulwich Picture Gallery in South London, incidentally, it’s the world’s oldest purpose-built picture gallery, mounted an exhibition I curated titled Cutting Edge – Modernist British Printmaking. 95% of the exhibition were the Futurist inspired linocuts by the artists who were students of Claude Flight who taught a revolutionary new method of creating linocuts. It was the highest attended summer show in Dulwich’s exhibition history with an attendance of 90,000 visitors.

My first choice is Cyril Power’s – The Eight
Power is undoubtedly a consummate master of the linocut medium and The Eight, made in 1930, is one of his most widely known images that is frequently reproduced.

Power and Sybil Andrews shared a home and studio in Brook Green, a short walk from Hammersmith and the River Thames where Power would watch the oarsmen powering their way under Hammersmith Bridge. He made several preparatory sketches and drawings before deciding on the final angle, which is looking down from the bridge as the rowers emerge from the Head of the River Race. The first race was held in 1926 and 21 crews took part.

The linocut you see is printed from four lino blocks in chrome orange, permanent blue, pale chrome and Chinese blue, one colour to each block. Then the block is individually inked, printed and dried awaiting the next block to have the same treatment then superimposed over the first printing and so forth until the fourth block is printed over the previous three, resulting in the finished print you see.

Like most of the prints of the Grosvenor School, they are printed on a thin Japanese paper and the ink transferred to the paper with skilful rubbing with various objects, including a spoon in some cases, a lighter rubbing resulting in a paler transfer of ink to the paper and a firmer rub resulting in a darker impression.

The success of The Eight as an image is the composition; the colours, their shirts gleaming from the uninked white of the paper, the dark heads in contrast to the shirts, the angle of rowers’ torsos and the patterning above the oars exudes the energy and forward momentum of the boat.

This linocut is available for sale in the gallery and is sold together with one of the preparatory drawings in pastel. The drawing and the linocut were displayed alongside each other at the Dulwich exhibition.

If the pair are of interest to you do get in touch by phoning the gallery on 020 7493 7939 or email me directly on gsamuel@osbornesamuel.com