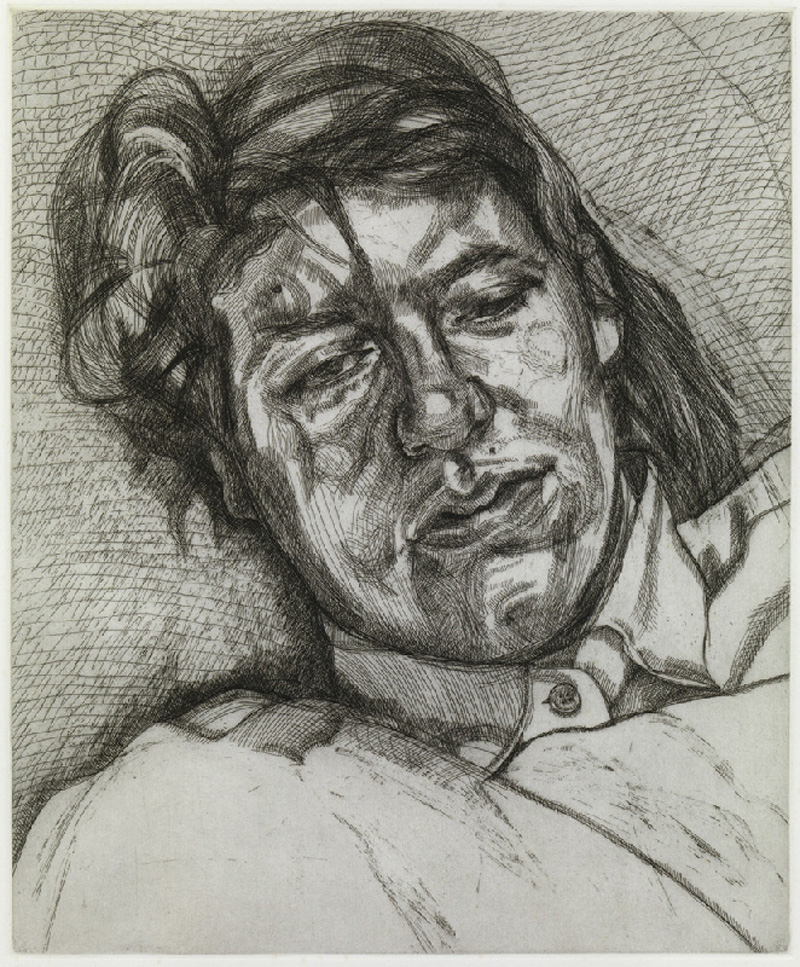 Bella, 1987
Etching on BFK Rives paper
Signed with initials and numbered from the AP edition
Aside from the edition of 50
69 x 57 cm

This is the next in our series of Special Features, favourite works chosen by gallery staff. We are all passionate about what we do and hope to be able to share in some small way our knowledge and enthusiasm.

Tania Sutton, a director at the gallery and member of staff for over 25 years, has chosen Lucian Freud’s portrait of his daughter, Bella.

In the early 1990’s I started my career in the art world, post University at Lumley Cazalet in London. They held an exhibition of a prominent and well-connected artist of the time, who had also briefly taught Lucian Freud. Lucian attended the opening, deferring to his tutor by also not staying long, thus not detracting the attention away from the artist. Lucian Freud was by this time arguably one of the greatest living artists, and now considered to be one of the major figurative painters of the 20th century.

Freud’s work is made in an uncompromising and seemingly confrontational style. His attention to detail is at times unnerving and intense, and yet also distinctly compassionate without being sentimental of the human condition. Freud spoke of his famous grandfather Sigmund Freud, saying he would physically asses each patient before approaching anything further. For Freud this was right, as he too approaches each subject, with almost an analytical coolness which produces images of monumental stature, regardless of their actual scale.

Lucian Freud made his first etching in Paris in 1946, using the wash-basiz in his hotel room as an acid bath. Five small-scale etchings date from this decade, following which Freud ceased printmaking for thirty-four years. Thereafter, beguiled by its ‘element of danger and mystery’, he steadily created an impressive contribution to the medium.1

Freud’s etchings from the mid-1980s onwards are distinguished by their size and technical command. Standing his copper plates upright on an easel, for the first time, he was able to work with greater force and fluidity. He claimed to find etching easier than drawing, candidly acknowledging the role that redrawing can play in printmaking. Sometimes Freud would ask the printer to erase sections, to crop an image or to scrap a final printing in favour of earlier proofs. Working closely with Marc Balakjian, at Studio Prints in Kentish Town, Freud was always present at the biting and proofing of his plates.

Bella (1987), a portrait of his daughter, is defined by dense hatching, marking the head’s weight against the pillow, its wisps of hair and the face’s contours. Freud sought further contrast within the image, however. Giving the printer a proof shaded with grey wash to indicate where ink should be left on the plate after wiping, the etching was reproofed until he was satisfied. Craig Hartley describes the result as ‘seductively tonal’, one of Freud’s most beautiful portraits.2

This is however, in no way a sentimental portrait of a much-loved daughter. The angle is unflattering, the expression dispassionate and disengaged. Yet, by revealing the effects of time, perhaps even the cost of living life across her face, Freud has given his sitter a gravitas, an intensity, hinting with respect at the strength of character that lies beneath and imbueing the image with a sense of timelessness.

I find this etching utterly beguiling.

Frank Auerbach wrote pertinently and beautifully about Freud in the Tate exhibition catalogue in 2002:

‘When I think of the work of Lucian Freud, I think of Lucian’s attention to his subject. If his concentrated interest were to falter he would come off his tightrope; he has no safety net of manner. Whenever his way of working threatens to become a style, he puts it aside like a blunted pencil and finds a procedure more suited to his needs.

I am never aware of the aesthetic paraphernalia. The subject is raw, not cooked to be more digestible as art, not covered in a gravy of ostentatious tone or colour, nor arranged on the plate as a ‘composition.’

The paintings live because their creator has been passionately attentive to their theme, and his attention has left something for us to look at. It seems a sort of miracle.’₄

For further information about Bella or other prints available by Lucian Freud, please contact: tsutton@osbornesamuel.com