Bernard Meadows (19 February 1915 - 12 January 2005) was a British modernist sculptor. Meadows was Henry Moore's first assistant; then part of the Geometry of Fear school, a loose-knit group of British sculptors whose prominence was established at the 1952 Venice Biennale; a Professor of Sculpture at the Royal College of Art for 20 years; and returned to assist Moore again in his last years. Meadows was born in Norwich, and educated at the City of Norwich School, After briefly training as an accountant in 1931, he attended Norwich School of Art and then in 1936 became Henry Moore's first assistant at his studio in Kent. He participated in the first Surrealist exhibition in London in 1936. He lived in Chalk Farm from 1937, assisting Moore in his studio at Hampstead, and studied at the Royal College of Art (although his first application was rejected, due to his association with Moore) and at the Courtauld Institute. In the Second World War, he initially registered as a conscientious objector, but when Nazi Germany invaded the USSR in 1941, he withdrew his objection. He was called up to the Royal Air Force and worked in air-sea rescue, serving for a time the Cocos Islands in the Indian Ocean, where he was inspired by the large crabs. He returned to Moore's studio after the end of the Second World War, and helped Moore with his marble sculpture Three Standing Figures 1947 and his 1949 bronze Family Group. After the war he found acclaim. An elm figure was exhibited in the open air sculpture exhibition at Battersea Park in 1951, alongside the Festival of Britain, which went to the Tate Gallery. He exhibited in the British Pavilion at the Venice Biennale a year later, alongside a new generation of Briitish sulptures, including Anthony Caro, Lynn Chadwick and Eduardo Paolozzi. Their angular artworks contrasted with the more rounded styles of their seniors, Henry Moore and Barbara Hepworth, and they were dubbed by art critic Herbert Read as the "Geometry of Fear". He held his first solo exhibition at Gimpel Fils in 1957, with four more in the decade to 1967. He also exhibited at the São Paulo Biennale in 1957, Documenta 2 in Kassel in 1959, and the 1964 Venice Biennale. He exhibited from New York City to Tokyo and produced a stream of public and private art in Britain and beyond. His edgy pieces often based on animals and seemingly carved from shrapnel could imply Cold War menace. Meadows' work titled Public Sculpture, a controversial assembly of stone blocks and balls of dripping and dimpled metal, was commissioned for the Eastern Daily Press in 1968 at Prospect House, Norwich. The sculpture is on permanent display outside the building together with prints and drawings in the Prospect House foyer. Also on display an illustrated panel telling the story of Bernard Meadows and Public Sculpture. Teaching commitments took precedence over his own work. He taught at the Royal College of Art from 1948, and was Professor of Sculpture from 1960 to 1980, where his students included Robert Clatworthy and Elisabeth Frink. He was a member of the Fine Arts Commission from 1971 to 1976. He returned to assist Moore at Perry Green, Hertfordshire from 1977, after Moore's health started to fail, and continued to help his mentor's estate after Moore's death in 1986, becoming an acting director of the Henry Moore Foundation. The Yorkshire Sculpture Park held a retrospective exhibition of Meadows’ work for his 80th birthday in 1995, with a second retrospective at Gimpel Fils in London, the first exhibitions of his works for 15 years. He married his wife Marjorie Winifred Payne in 1939. They had two daughters. He died in London. 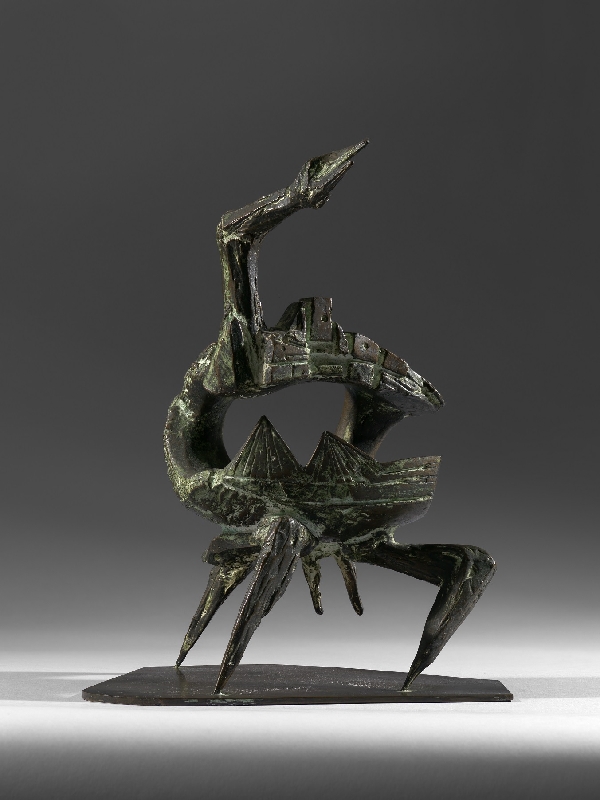 A key figure of post-war British sculpture, Bernard Meadows came to prominence as part of what is now referred to as the ‘Geometry of Fear’ generation of sculptors. He exhibited internationally throughout his career and is now represented in the permanent collections of major museums such as the Guggenheim, Hirshhorn and Tate.

Following a very brief and unsuccessful spell as a trainee accountant, Meadows enrolled at the Norwich School of Art aged 19. In his second year it was arranged for three selected students to pay a visit to Henry Moore’s Hampstead studio. Moore, so impressed by Meadows, sent him a postcard the following day asking if he may like to assist him for the upcoming Easter holidays. Meadows gladly accepted and, bar the war years, he would remain Moore’s assistant until 1948. During the war Meadows volunteered for the Royal Air Force and in 1943 was posted to India, including an extended period on the Cocos Islands in the Indian Ocean. Counting surrealism and Picasso amongst his early influences and having learnt both the craft and sensibilities required of a sculptor from Moore, it was Meadows’ experience of these islands, and particularly their wildlife, which was to become an important marker in developing his own artistic development. The Cocos have a prevalent community of all manner of crabs which fascinated Meadows; tree crabs, large tank crabs, mosquito crabs, which although must have seemed alien at first became a most familiar feature of day to day life.

Following the end of the war Meadows returned to Britain and although he initially continued to work for Moore, by 1950 he developed his own sculpture. At first these were biomorphic abstractions akin to Moore’s work but he quickly moved into new territory with abstracted bird forms and in 1952 his first crab (Black Crab, Tate, London). Like the present cast, these works are at first animal yet remain not entirely removed from the preceding humanoid forms thus allowing an interpretation of representation of the human experience. In 1951 Meadows featured in the Festival of Britain to acclaim but his presence on the international stage was very much cemented by his inclusion in the now fabled exhibition in the British Pavilion at the 1952 Venice Biennale, New Aspects of British Sculpture. This exhibition championed the work of Meadows and seven other young contemporaries (Adams, Armitage, Butler, Chadwick, Clarke, Paolozzi and Turnbull). These artists worked in a more rough and ready aesthetic than the then established mode and shared a common concern borne from memories of war horrors witnessed just years earlier and the fear induced by the developing Cold War. Herbert Read penned the catalogue introduction from which the nomenclature for the group derived:

These new images belong to the iconography of despair, or of defiance; and the more innocent the artist, the more effectively he transmits the collective guilt. Here are images of flight, or ragged claws ‘scuttling across the floors of silent seas’, of excoriated flesh, frustrated sex, the geometry of fear.

Belonging to this period is Large ‘Jesus’ Crab, so called as the first cast was acquired by Jesus College, Cambridge. The piece is believed to be based on the form of the male Fiddler crab; a fast-moving specimen, with a cocoon-like body, raised on angular legs and possessing two eyes on stalks (which Meadows’ has moved underneath) and one greatly outsized claw that it raises aloft in a mating display. It perfectly suits Meadow’s requirements for his representation of human concern; composed of hardened shell over tender flesh, in a state of both threat and defence.

The present cast remained in Meadows’ possession until at least 1965, and latterly entered the collection of Tony Paterson. Paterson was a lawyer and through his friendship with Bryan Robertson, who he met at Toynbee Hall in the 1950s, he became much involved with the contemporary art scene from the 1960s when it is thought that he acquired this sculpture. He provided legal advice to the Air Gallery, Space (an organization to provide studios for young artists), the New Contemporaries and was Honorary Solicitor to the Contempory Art Society. Casts of the half scaled maquette for the present work are in the collection of the Victoria Art Gallery, Bath and the Tate Gallery, London.