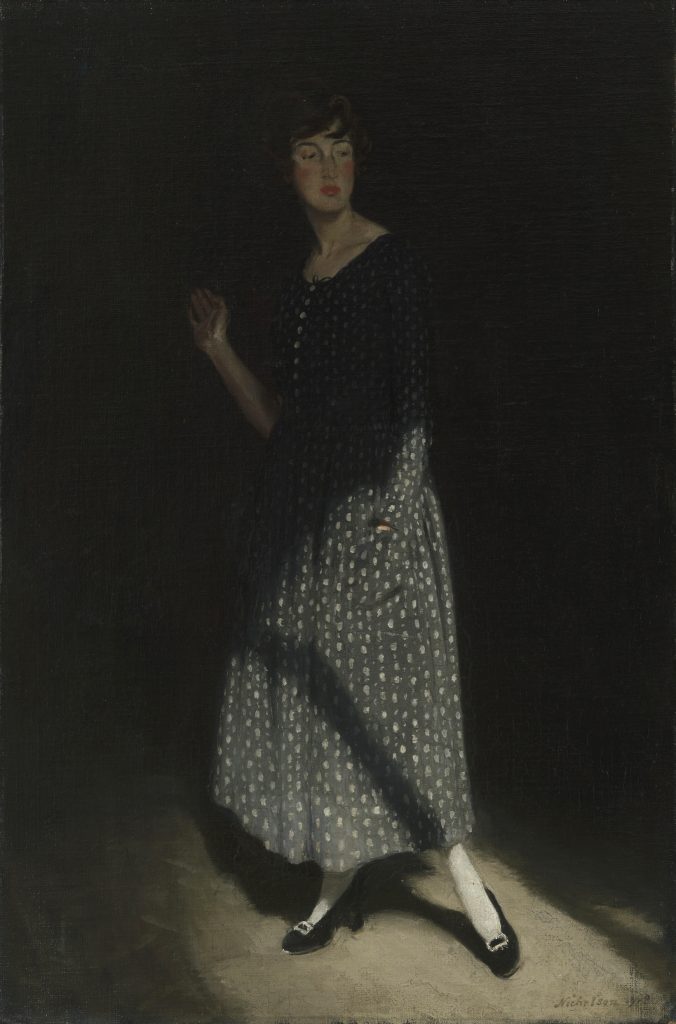 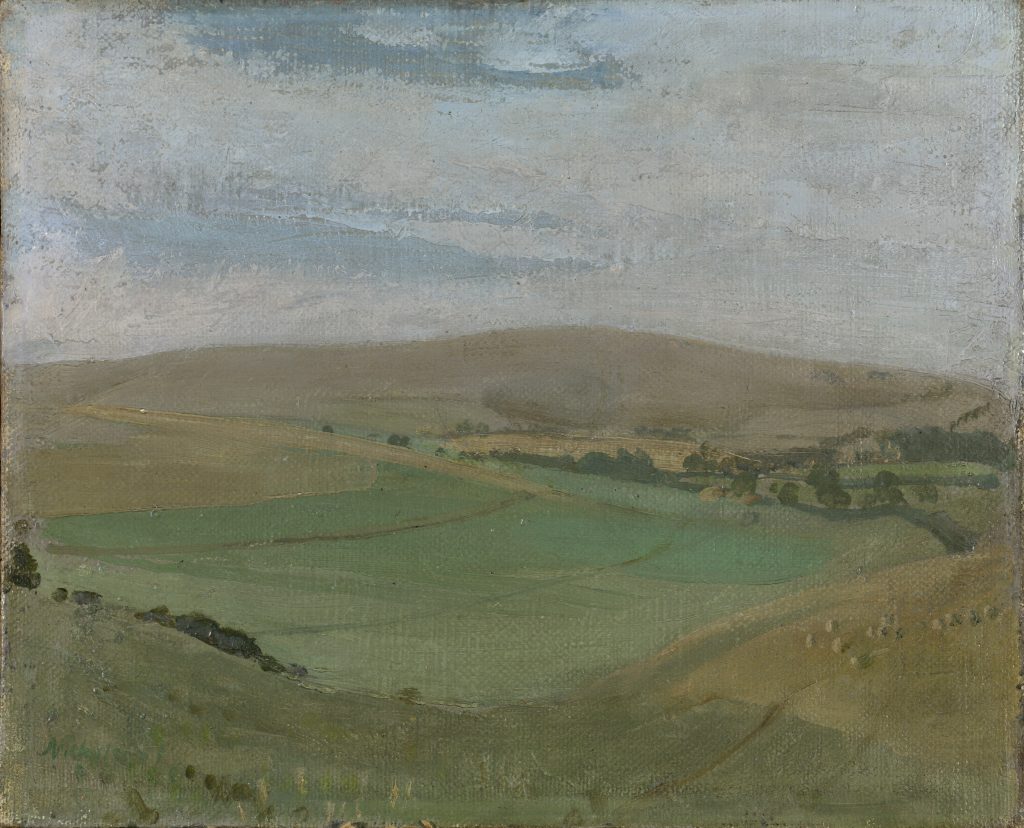 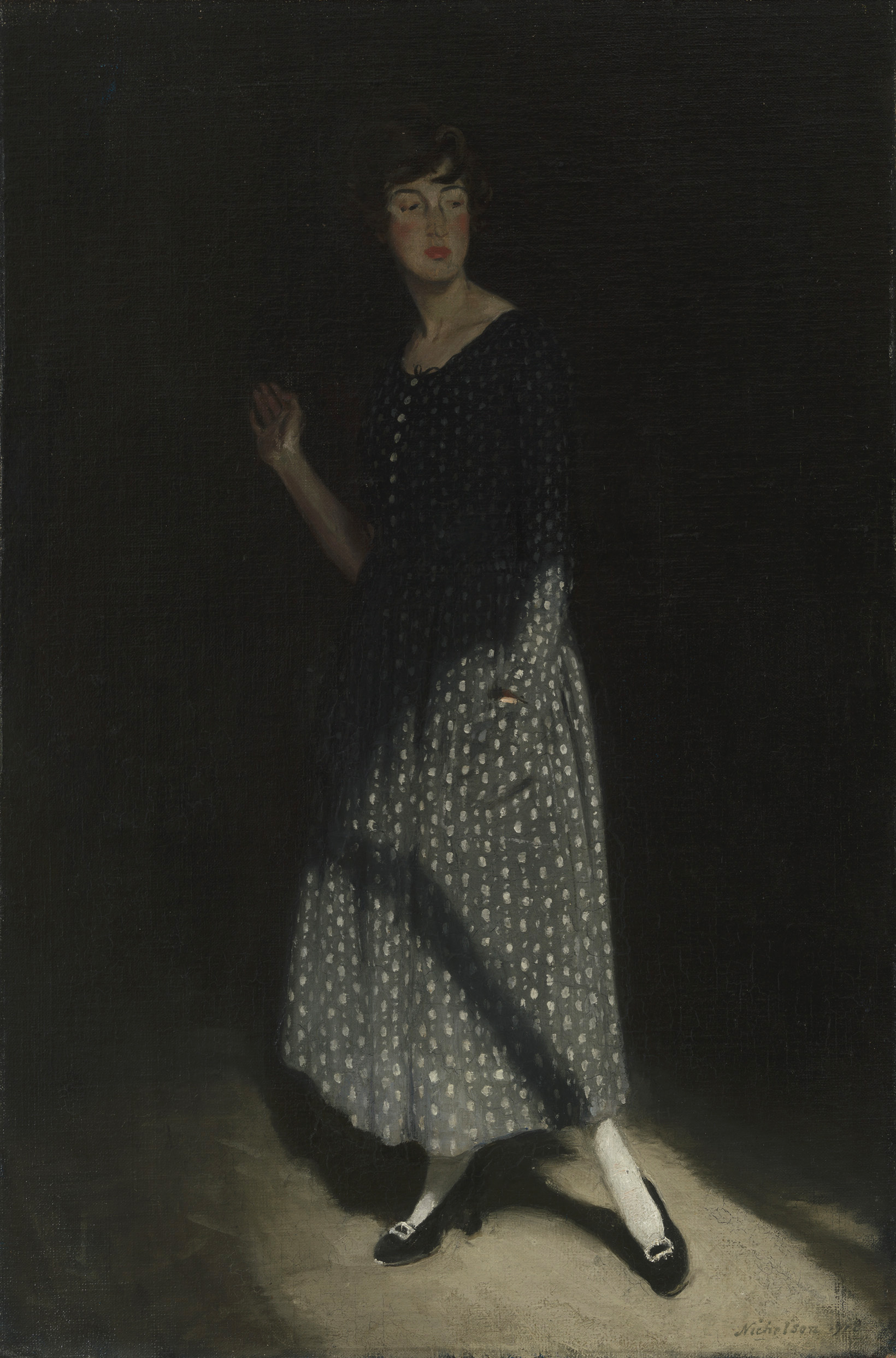 Mrs Gertrude Kinnell, probably purchased
from ISSPG in 1918
Acquired after her death by FBC Bravington
1967 with Marlborough Fine Art, No 17 as oil on canvas board
The Estate of the Late Michael Stratton
(acquired from the above)
Thence by descent

Hugh Stokes ‘The Autumn Exhibition of the International Society of Sculptors, Painters and Gravers’ The Ladies’ Field, 19 October 1918, p180-1

This intriguing work is Nicholson’s only portrait of his second wife Edie whom he married in October 1919. Signed and dated 1918, it must have been completed by the end of September that year when the painting was exhibited at the International Society under the mysterious title of Madame X as ‘Megan’ in ‘Tan-y-Bryn’.  No documentation has been found as to where, or when in 1918 the work was executed.

With hindsight it has been noted that Nicholson chose to show in the same exhibition a portrait of his ‘former’ mistress Marie Laquelle, Le Bonnet tricolore (private collection), together with that of his future wife. (The two works were for sale.) The faces of both women are in shadow, avoiding the viewer’s gaze, but Edie is shown full face, recognizable by anyone who knew her, while her rosy cheeks and lips, against a pale skin and dark curly hair emphasise her youth – she was 28. However for the artist and his two sitters, like so many people, 1918 was a year of cataclysmic changes.  Two tragedies marked this nine month period – the news that Edie’s husband, Jack Stuart Wortley, was one of the thousands missing in action at Bullecourt, either killed on 21 March, or a prisoner; then on July 13 came the death of Nicholson’s wife Mabel in the influenza epidemic.

If the painting dates from before March 21 we are looking at a close friend of the Nicholson family, in particular of Mabel’s and of the artist’s son Ben; also a patron, for Edie had commissioned a portrait of her husband from Nicholson executed autumn 1915 (private collection), and the daughter of a patron since the couple had first met in 1912, the year Edie married Jack Stuart Wortley, when Nicholson was painting her mother, Lady Phillips (Johannesburg Art Gallery, on loan to Vergelegen Estate). In the early months of 1918 Nicholson is known to have painted a portrait of Edie’s brother, Capt. Francis Phillips (untraced: last recorded Central Mining and Investment Corporation, London) – a commission from Lady Phillips.

In the following months to the end of June Edie was still clinging to the hope that her husband was alive, though Nicholson and her family thought otherwise.  (His death was not confirmed until after the war had ended.) Nicholson wrote to Ben in America that Mabel was visiting Edie daily. In May Edie is believed to have stayed at Folly Farm, Berkshire where Nicholson was working the dining room murals for Mrs Merton, who was also a mutual friend. The portrait could date from that visit.

After Mabel’s unexpected death Edie joined Mrs Merton, Edwin Lutyens, and other friends of the artist to give him what support they could. In late August she arranged for Nicholson to paint a portrait of her father, Sir Lionel Phillips, but the project was abandoned the following month. (In 1924 two portraits were executed, the smaller version is in a private collection while the other was destroyed by enemy action in 1941.)

The artist and designer Edith ‘ED’ or ‘Edie’ Phillips (1890–1958) was the only daughter of the mining magnate Sir Lionel Phillips and his wife Florence. She exhibited with the Seven and Five Group under the pseudonym Elizabeth Drury, and, later, under her married name, Edith Nicholson. Having studied art in Germany from 1906 to 1907, and Paris in 1909, she enrolled at the Slade in 1911, at the same time as Ben Nicholson, although they did not meet until later. In October 1912 she married Jack Stuart Wortley (1880-1918). Edie became friendly with Mabel and the Nicholson family during this year. As soon as war broke out her husband volunteered and in the summer of 1916 Edie moved with her two young children to Maesyneuadd, a large manor house near Harlech in Wales where Mabel and the Nicholsons were already living. It was during the following eighteen months that she became friendly with Ben. They painted each other’s portraits, which were exhibited together at the National Portrait Society in February 1918, four months after Ben had gone to America: Portrait of E (Sheffield Art Gallery) and Portrait of a Gentleman (untraced) by Edith Stuart Wortley. Mabel also exhibited an untraced work, while Nicholson’s magisterial full-length portrait of Walter Greaves (Manchester City Art Gallery) received all the press attention.

What clues does the portrait provide? The most striking feature is the use of light and shade. A contemporary reviewer, Hugh Stokes, having noted the title of the work, described it as a theatrical scene, but the line of shade across the dress and broken light in the foreground right could be read as natural light falling through a partially open garden door. There are no other clues as to the setting. It is true that we are looking up at the figure as if she were on the stage, but this might be a device to make Edie appear taller, since she was in fact quite petite.

The pose is unusual with the right arm raised forming a diagonal with the elegantly extended left foot. (The light catches the shoe buckles – perhaps they are Georgian set with diamante.) Edie’s left hand is concealed in her pocket so we cannot see her wedding ring. In a way the pose recalls those of contemporary fashion mannequins, but also the tableau vivant that were so popular before the war. There was a ‘language’ to hand positions – the raised hand palm outwards conveying rejection or denial.

Her dress is a contemporary one, but are we looking at ‘Megan’ in costume or at Edie’s choice of dress? It is frustrating that the origin of the title under which the work was first exhibited has so far proved elusive. No published play or novel called Tan-y-Bryn has been found. This Welsh word meaning ‘hill of fire’ can be interpreted in various ways, including a hill lit by the rising or setting sun. A ballad or narrative poem in the great tradition of Welsh oral verse may be the source. Madame X recalls Sargent’s notorious painting, or perhaps it was all an attempt to confuse the viewer and conceal the sitter’s identity?

The work was probably purchased direct from the International Society by Mrs Gertrude Kinnell at the same time that she acquired Le Bonnet tricolore. She already owned Nicholson’s portrait of Max Beerbohm (National Portrait Gallery). The title was changed to Lady in Grey by the subsequent owner, the collector F. B. C.‘Bim’ Bravington who was a friend of Kit Nicholson, the artist’s youngest son. Grey rather than black was the colour worn by war widows which might suggest the work was painted after March 1918.

Concluding his review of the International Society exhibition Hugh Stokes declared he would like to dance to the music of Moussorgsky in front of the paintings of Mr McEvoy, Mr Nicholson and Mr Philpot. Referring with WN’s two portraits: ‘These are canvases in which the artist leaves nothing more to be said.’ This is true, although there are some things the viewer might like to know. 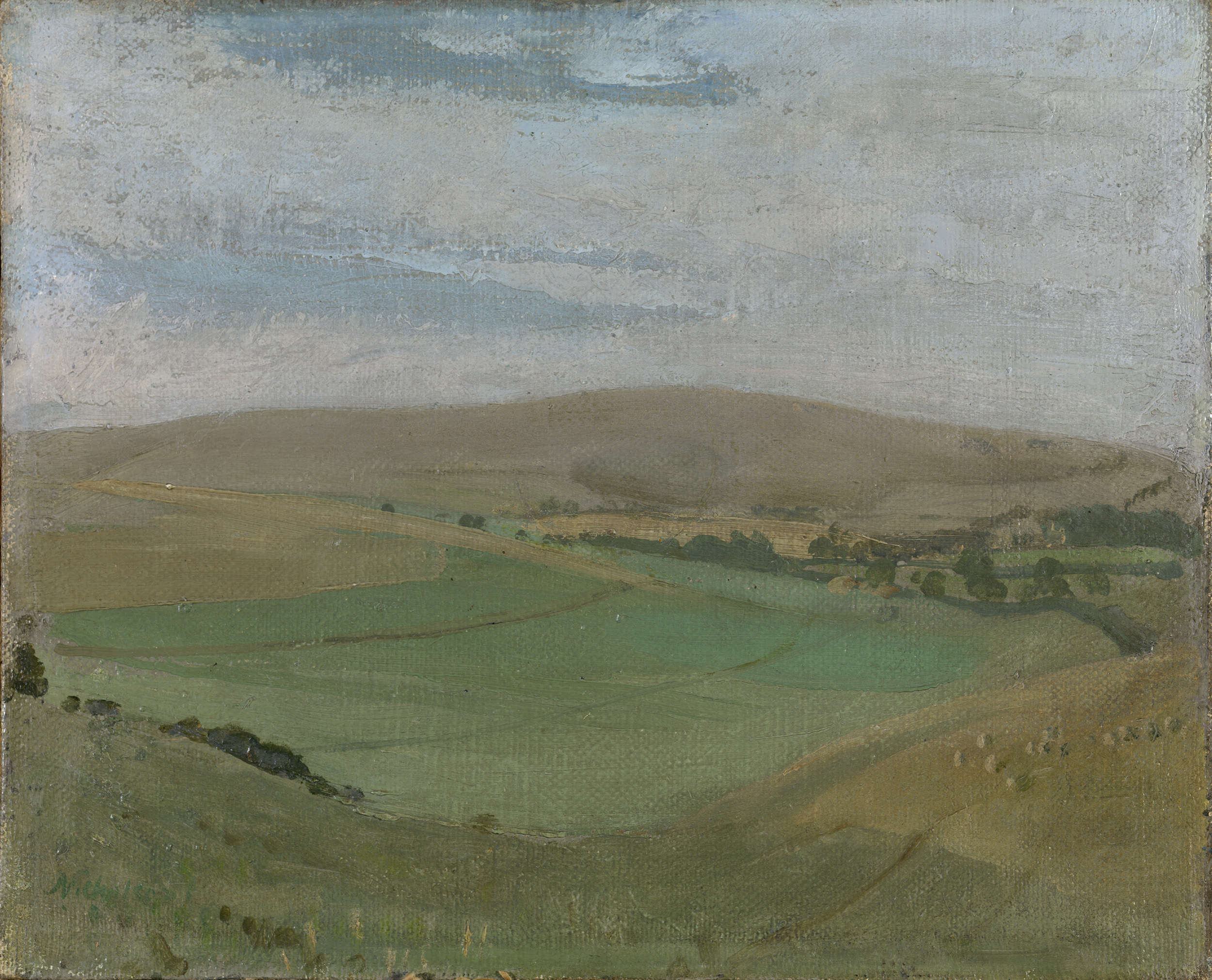 William Nicholson is celebrated as a painter of the Downs, whether those of Sussex, or Wiltshire where he lived at for over a decade from 1923 at Sutton Veny. One noticeable difference between these two areas is that the thin layer of top soil over chalk of the Sussex Downs could support only flocks of sheep, watered by dew ponds, whilst in this part of Wiltshire the chalk downs fed by streams support arable farming in the fertile valleys, as well as sheep.

Nicholson observed the subtle changes in tone and colour indicating the different crops planted and how they altered over the seasons. Haystacks and corn stooks, withy beds and water meadows became subjects for his expansive landscapes, together with  cloudscapes and undulating hills and valleys seen in this painting. One of the most attractive rivers with its clear water running over chalk and gravel beds is the Wylie. Rising on White Sheet Down to the west of Sutton Veny the River Wylie turns north towards Warminster as it wanders through the Deverills, starting at Kingston Deverill, then Monkton Deverill and on until it reaches Longbridge Deverill. These settlements are medieval or older and grew prosperous trading in wool and corn. The river then runs around the outskirts of Warminster and turns East-South-East to flow on past Sutton Veny on its way to join the river Nadder at Wilton.

The title of this painting is inscribed in the artist’s hand – Monkton Deverill. However, subsequent owners who had lived all their lives in the area identified it as Kingston Deverill: a view looking towards Brimsdown Hill taken from the road that runs between Warminster and Mere. There is in fact less than a mile between Kingston Deverill and Monkton Deverill so Nicholson, a relative newcomer to the area, might have got his Deverills confused.