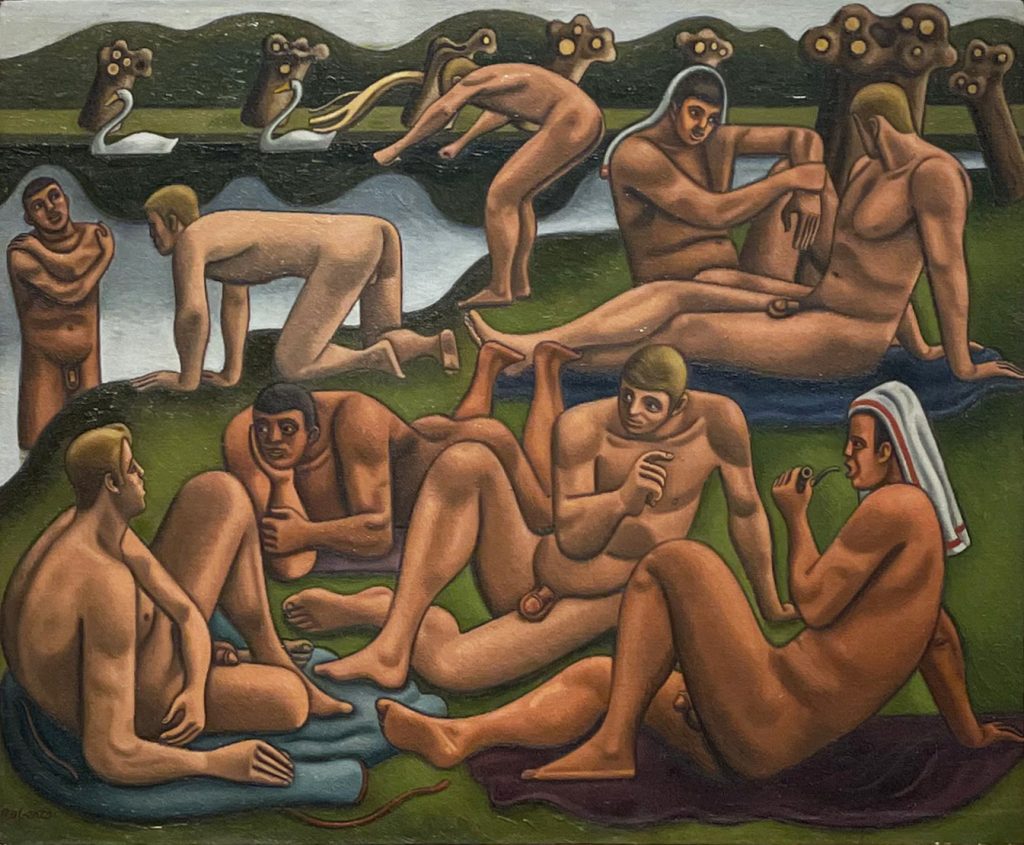 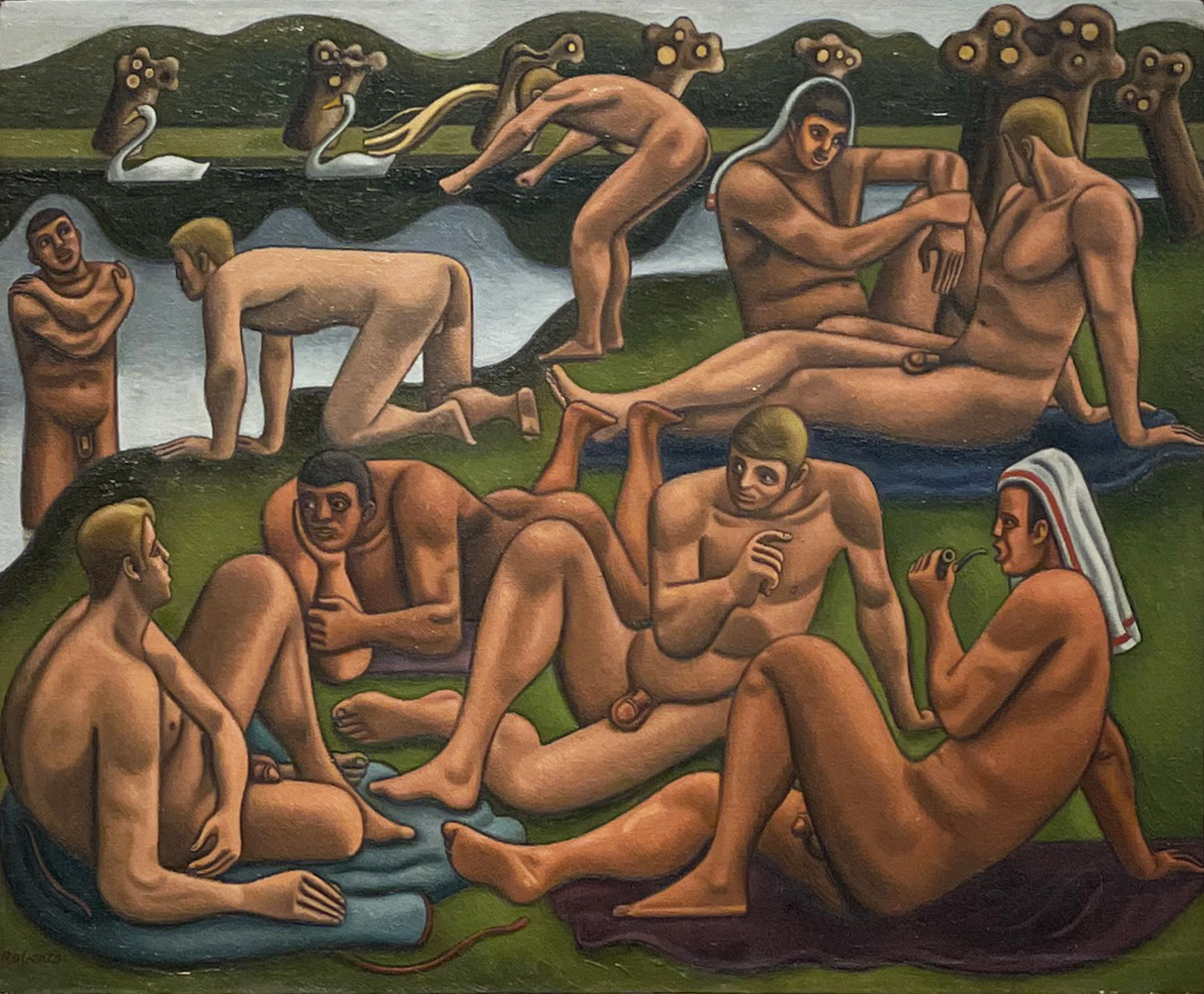 Born in the East End of London in 1895, William Roberts began observing and documenting people in his local community from very early on in his career. At the age of just eighteen, in 1913, prior to the outbreak of World War I, his remarkable capacity for draughtsmanship and complex pictorial design were confidently outlined in two drawings, Leadenhall Market (Tate Gallery) and Billingsgate (Private Collection).

Then, during World War I, working as an Official War Artist, he produced some of the most searing images of the conflict on the Western Front, in particular the Battle of Ypres.

By the outbreak of World War II, and despite Roberts’ significant contribution to early British Modernism and the Vorticist movement, he and his wife Sarah were still living in poverty in London. Many artists had already escaped the capital to the relative safety of the countryside, but Roberts remained. Through various friendships, notably with Sir Muirhead Bone who was responsible for the organisation of war artists, Roberts again secured a commission from the War Artists’ Advisory Committee, in January 1940, and was dispatched to the munitions factory at Woolwich Arsenal. Shortly after, during an early bomb raid and a direct hit on their road, the Roberts decided to follow their old friends Bernard and Nora Meninsky, to Oxford. They settled in a council flat in the suburb of Marston on the banks of the River Cherwell, the setting for his impressive oil, Parson’s Pleasure, which has also been known by the title, On the Lawn.

Andrew Gibbon Williams comments on this time, ‘The Oxford suburb of Marston, for example, in its limited way, turned out to be as generous a source of subject matter as London. A gypsy encampment around the corner from where the Robertses lived was precisely the kind of thing the artist could make something of, and the River Cherwell, with its punting, fishing and riverside picnics, offered the mixture of nature and human activity that Roberts liked best.’ 1

The area, Parson’s Pleasure, was located in the University Parks of Oxford University beside the River Cherwell, and up until as recently as 1991 was a secluded location for male-only nude bathing, traditionally frequented by dons and undergraduates of the university.

Roberts’ circa 1944 canvas, showing a group of naked men reclining and conversing, very much recalls the Classicism of the French 17th century painter Nicolas Poussin, and is imbued with a strong sense of calculated design and stylisation. The figure located upper centre for example, preparing to dive into the river with his outstretched arms and bent knees, appears frozen in time, and the curves of the river cleverly follow the contours of the heads of the standing man upper left and seated figure upper right, with a towel over his shoulders. Everything in the canvas has an exact and purposeful positioning, which creates an overall coherent and sophisticated composition.

Commentators have readily offered high praise for the painting in this regard:

‘The impulse of Roberts to classicise, traceable through several works of the 1930s and paramount in a picture such as The Judgement of Paris, achieves a magnificent apotheosis in one of his finest works Parson’s Pleasure. It was against Roberts’ nature to wholly invent a subject, and for this reason the idea of manufacturing a nude composition for its own sake would have struck him as bogus. But the notorious Oxford student bathing spot frequented by generations of male undergraduates offered the perfect legitimising excuse.’ 2

The artist’s second spell as an Official War Artist became increasingly fractious. A trip to France, for instance, was aborted by Roberts at Folkestone who offered ‘heavy fog’ as an excuse for not making the Channel crossing. His relationship with the War Artists’Advisory Committee eventually deteriorated beyond repair, and Roberts spent the rest of the war mainly in Oxford, where he embraced the English landscape tradition, so beautifully realised in Parson’s Pleasure.

Andrew Gibbon Williams remarks on this important oil painting, ‘Parson’s Pleasure is a remarkable picture to have emerged from wartime England…Notwithstanding the abstract reliefs of Ben Nicholson and the three-dimensional work of Henry Moore and Barbara Hepworth, Parson’s Pleasure represents the most convincing attempt to recapture the Classical spirit in mid-twentieth century English art. 3