The IFPDA Fine Art Print Fair is the world’s largest international art fair dedicated to printmaking from the 15th century to today.

Osborne Samuel will preview works from our forthcoming exhibition ‘Sybil & Cyril: Cutting Through Time’ exploring the relationship between Sybil Andrews and Cyril Power. 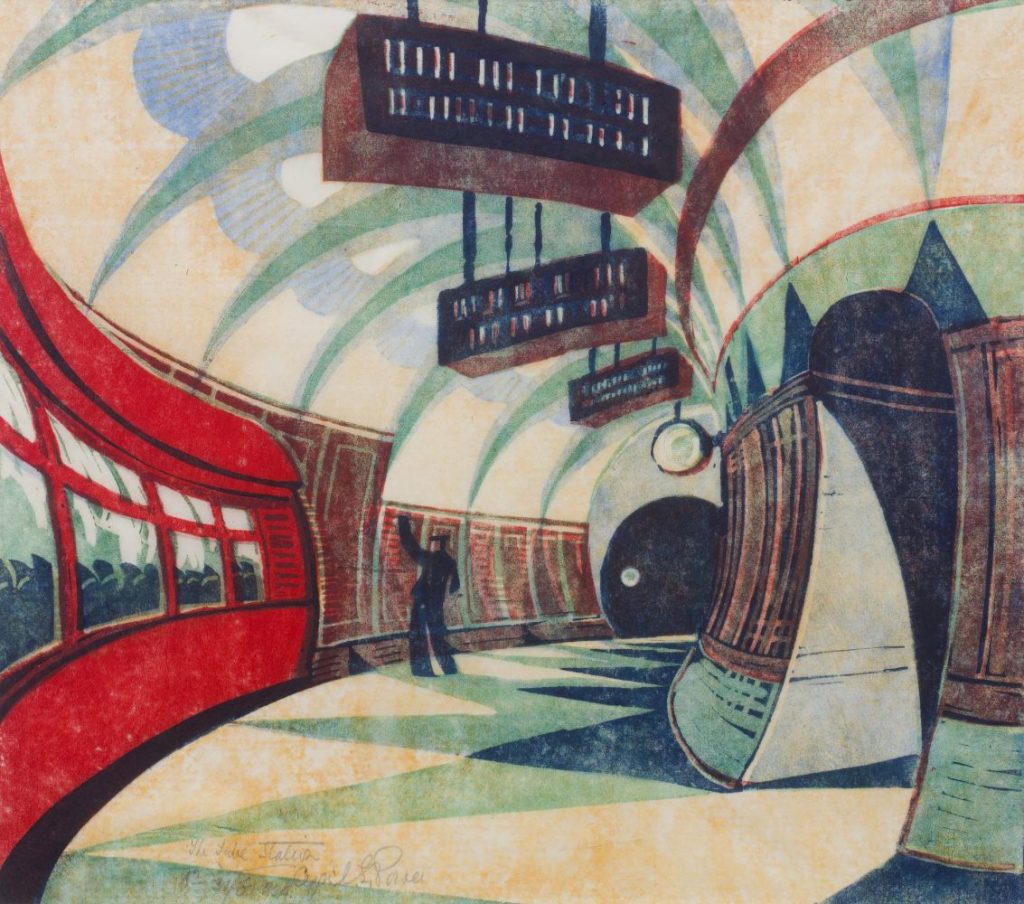 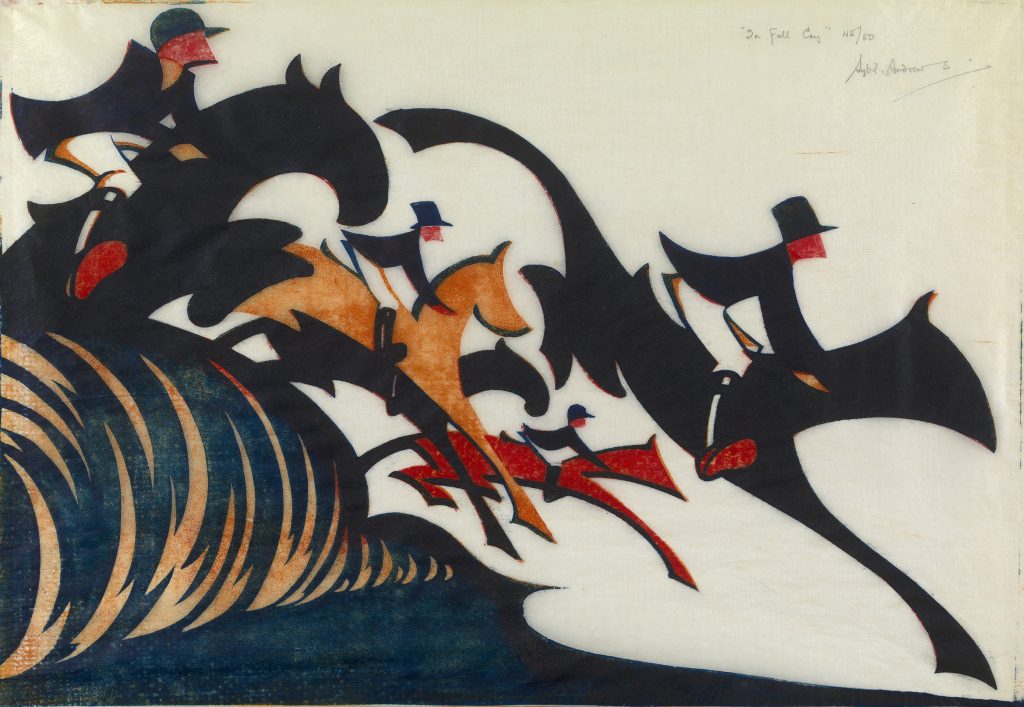 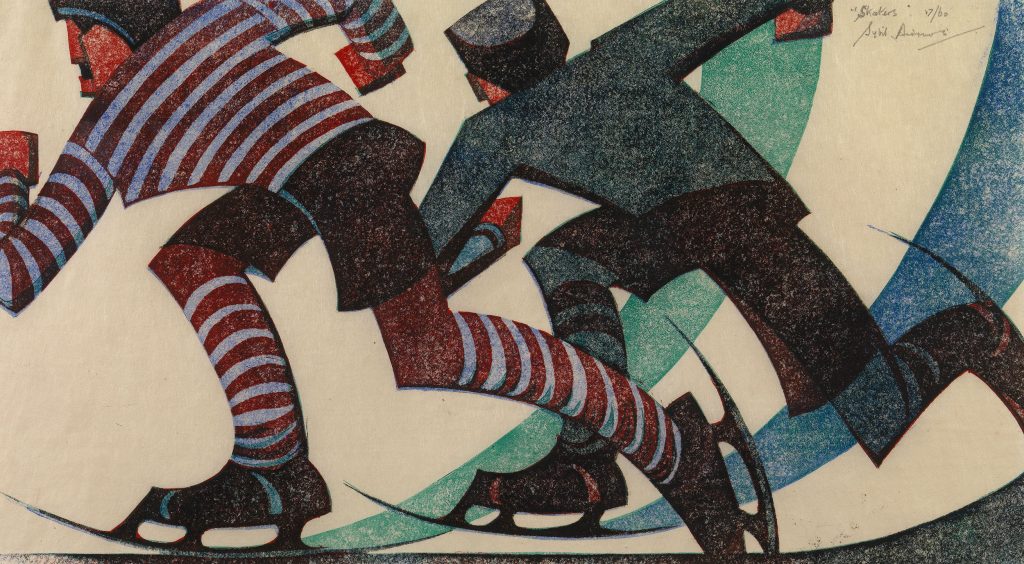 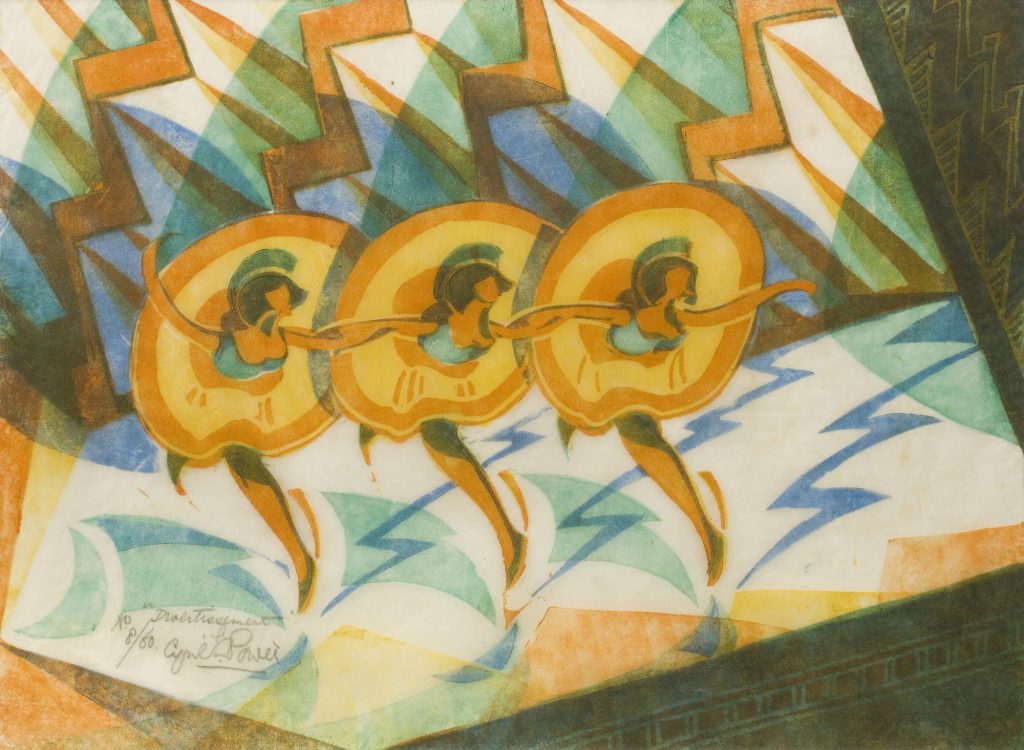 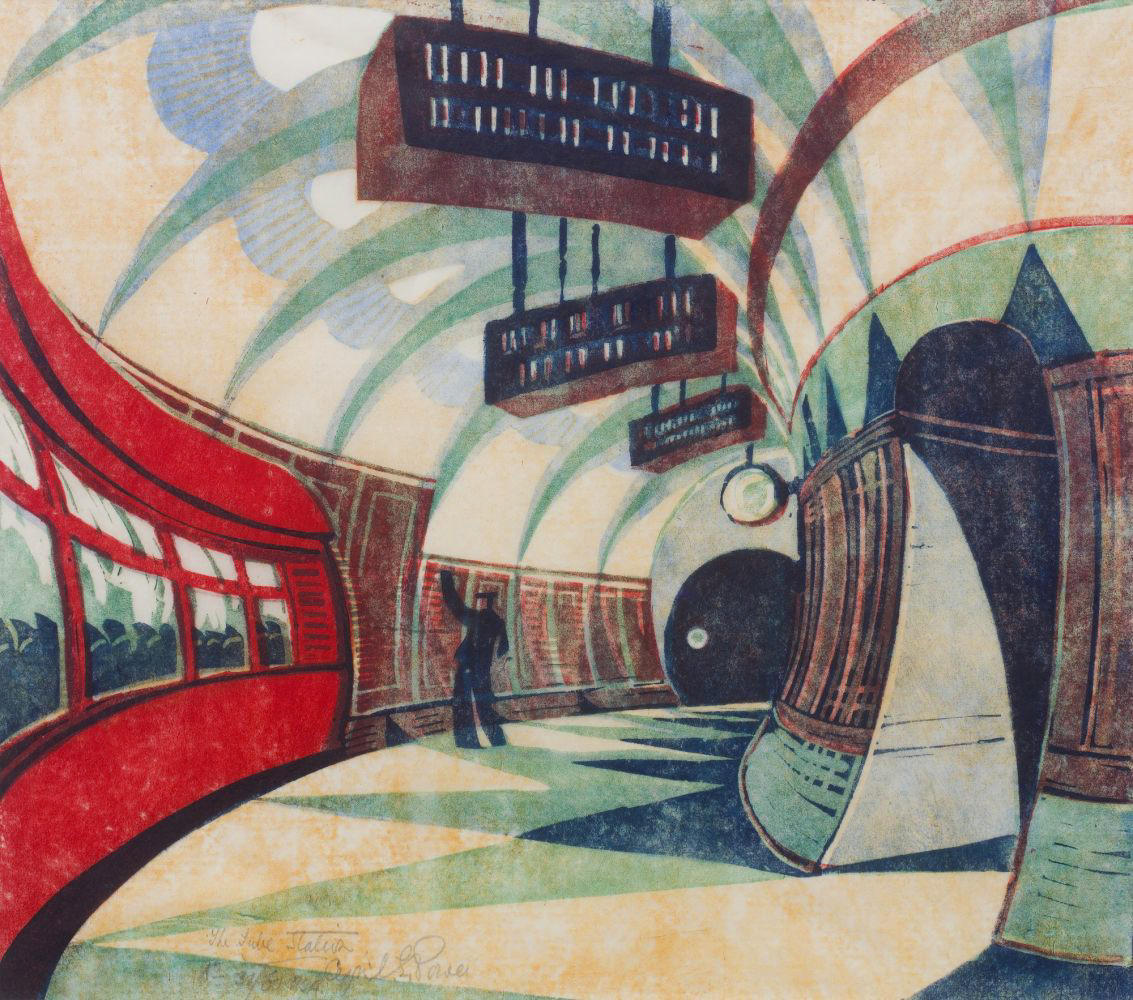 Machine-age London and its modern transport system became a central subject for the Grosvenor School artists. The expanding London Underground, the cities’ red buses and the reliable rush-hour crowds provided the artists with dynamic and contemporary subject matter. The Underground in particular was a favoured venue for Cyril Power, who recorded the escalators full of featureless commuters descending; a tube train carriage with its passengers, some strap-hanging, others claustrophobically seated with reticent English demeanour reading their newspapers; a Greenline bus with an open ‘sunshine’ roof or the swing-boats at funfairs were immortalised by Claude Flight and his followers.

The Tube Station made by Power in 1932 is one of his best known and collected linocuts. It is printed in five colours from five linoleum blocks on a thin oriental tissue paper. In total there were 120 impressions printed; the edition was numbered 1/60 – 60/60 in pencil and signed. The US edition such as this impression was inscribed USA Ed 1/60 – 60/60.

Power’s notes identify this as Bank Underground station which is named after the Bank of England and opened in 1900. It is served by the Central, Northern and Waterloo & City lines.  Here we see the iconic red London tube train as distinctive as the red London double-decker buses as it leaves the station waved off by the guard.  Its passengers are seen through the four windows, probably buried in the morning newspapers.  The curve of the roof is accentuated by the pattern and rhythm of the architecture, the fixtures of the indicator boards and the convex mirror that enabled the tube driver to see the platform.

Cyril Power was one of a group of artists that studied at the Grosvenor School of Modern Art under the guidance of their teacher Claude Flight, in London’s Pimlico district near Victoria Station.  Their imagery and the execution were at the cutting-edge of contemporary printmaking in the 1930s and is now widely collected and is some of the world’s greatest museums from the British Museum to New York’s Museum of Modern Art where there is a room dedicated to the Grosvenor school linocuts.

The Sunshine Roof is the famous composition by Power which features  the interior of a Green Line Bus. Green Line had its origin in the network of bus services established by the London General Omnibus Company in the 1920s and 1930s. After World War II, the network became part of London Transport,  and from 1970 to 1986 was operated by London Country Bus Services. In 2020 the company celebrated its 90th Anniversary.

The perspective of the composition is from the rear of the bus where the artist sat, the ‘sunshine roof’ above is open on a summer’s day. The passengers are fashionably hatted.  Some stare out of the windows, others glance to the left.  On either side and above, Power uses the curves and patterns to accentuate speed as the bus tilts to the right and hurtles along.

The driver is the artist’s son, also named Cyril Power.  He had gone to Australia to seek work and returned home during the depression of the 1930s.  The only work he found was firstly as a bus conductor, then he was promoted to driver.

The Merry-Go-Round, like Power’s other great linocut ‘Appy ‘Ampstead is a real tour de force of Power’s vision and skill in producing intricately cut and inked lino-blocks to produce an image of such incredible kinetic energy.

The Merry-Go-Round is surprisingly printed from only two lino-blocks, in Chinese and chrome orange and Chinese blue in an edition of 50 impressions.  Like his linocut The Giant Racer, The Merry-Go-Round was observed by Power at the Wembley Exhibition Fun Fair in west London, not far from his home in Brook Green in Hammersmith.

Power’s linocut is a stark contrast to Mark Gertler’s wonderful 1916 painting also titled Merry-Go-Round which is in the Tate Collection. In Gertler’s famous painting the figures are geometrical in shape, giving them the appearance of dolls, painted in blue, red and yellow. It is almost sedentary compared to Power’s whirling Merry-Go-Round that seems almost out of control as the riders spin around at breakneck speed, the central column appears to be bending under the momentum, the blue and orange patterning above the canopy of the merry-go-round creates a vortex of energy, the silhouetted black cut-out figures in the foreground look almost out of focus conveying the speed of the merry-go-round as the riders hold on for dear life! 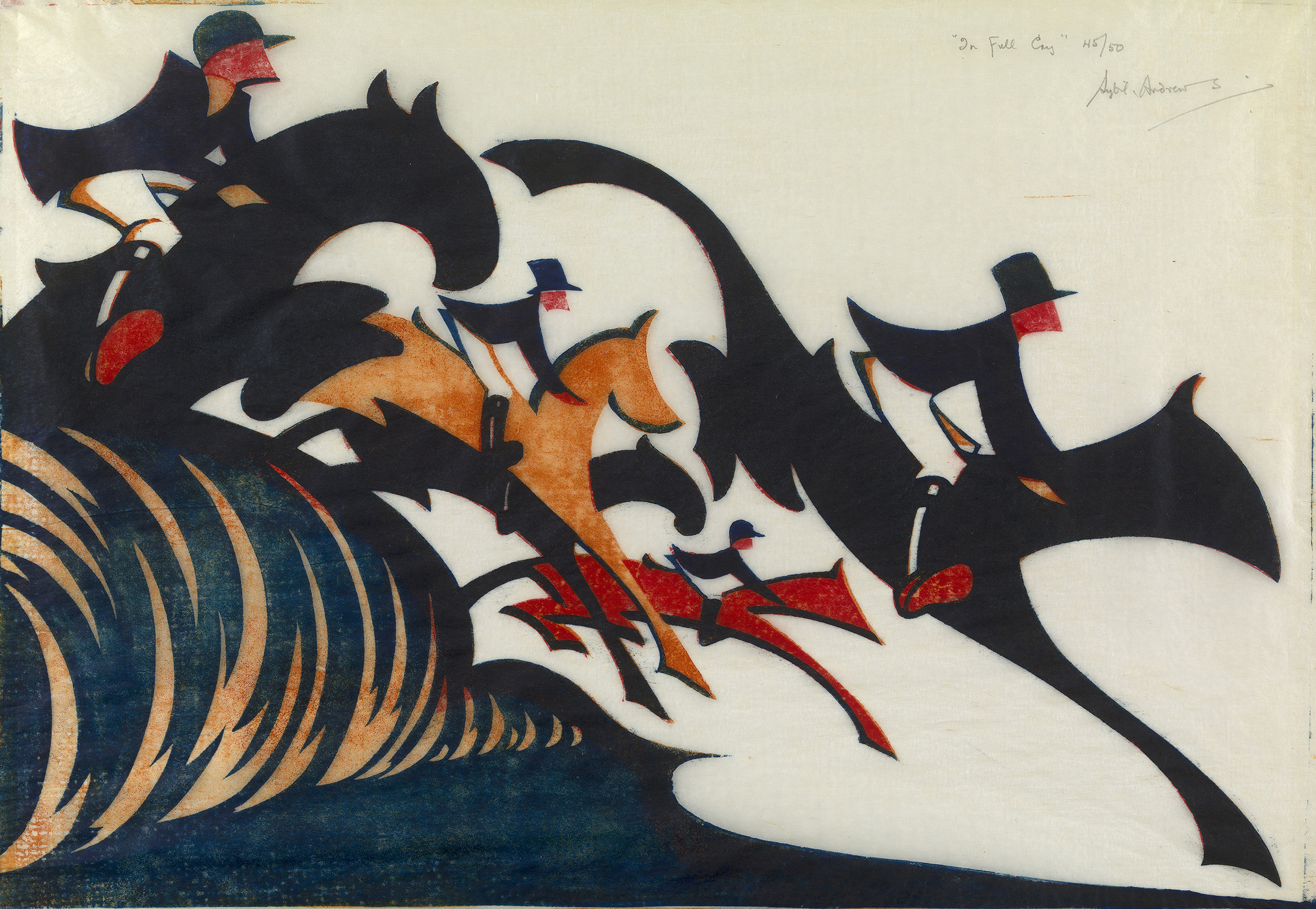 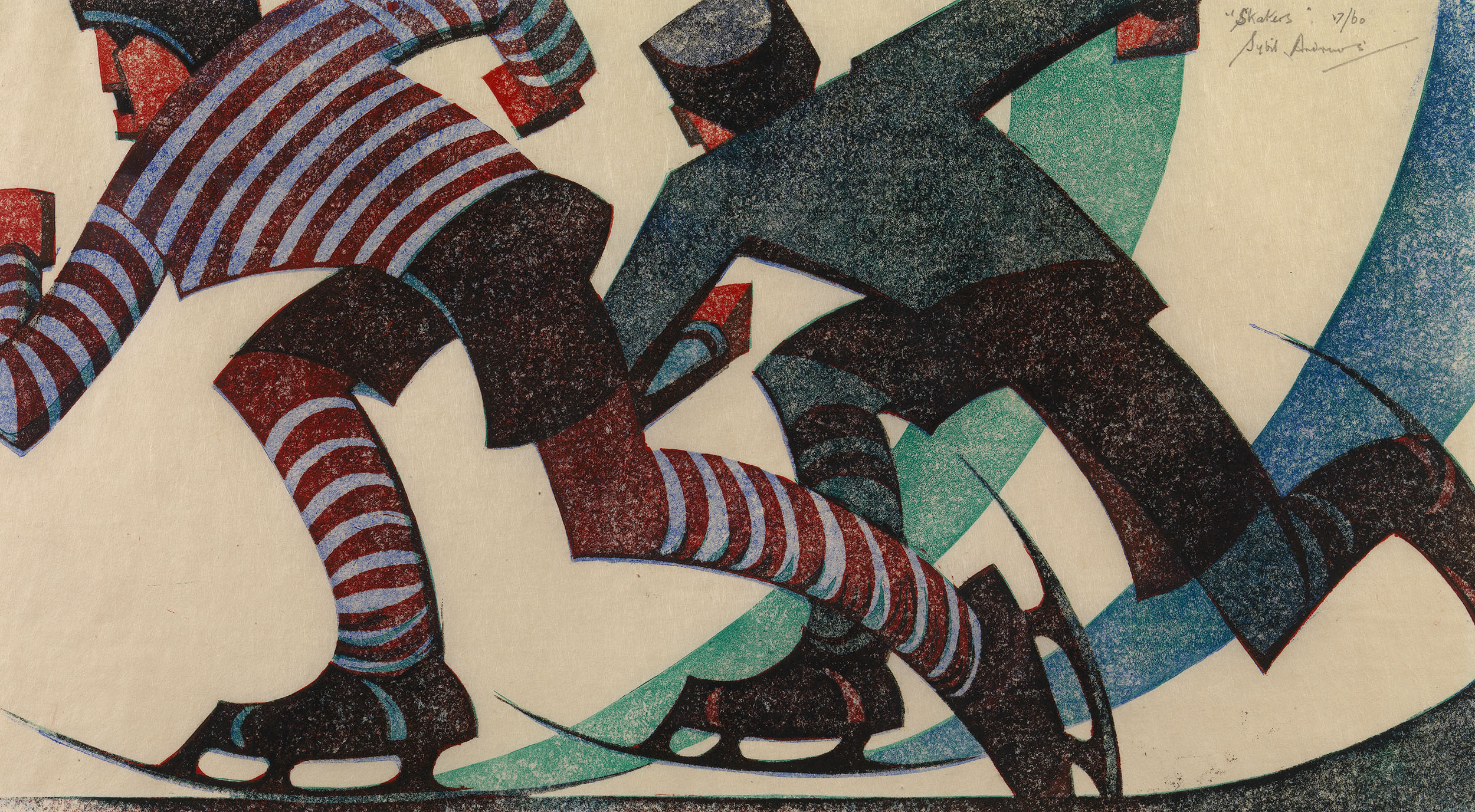 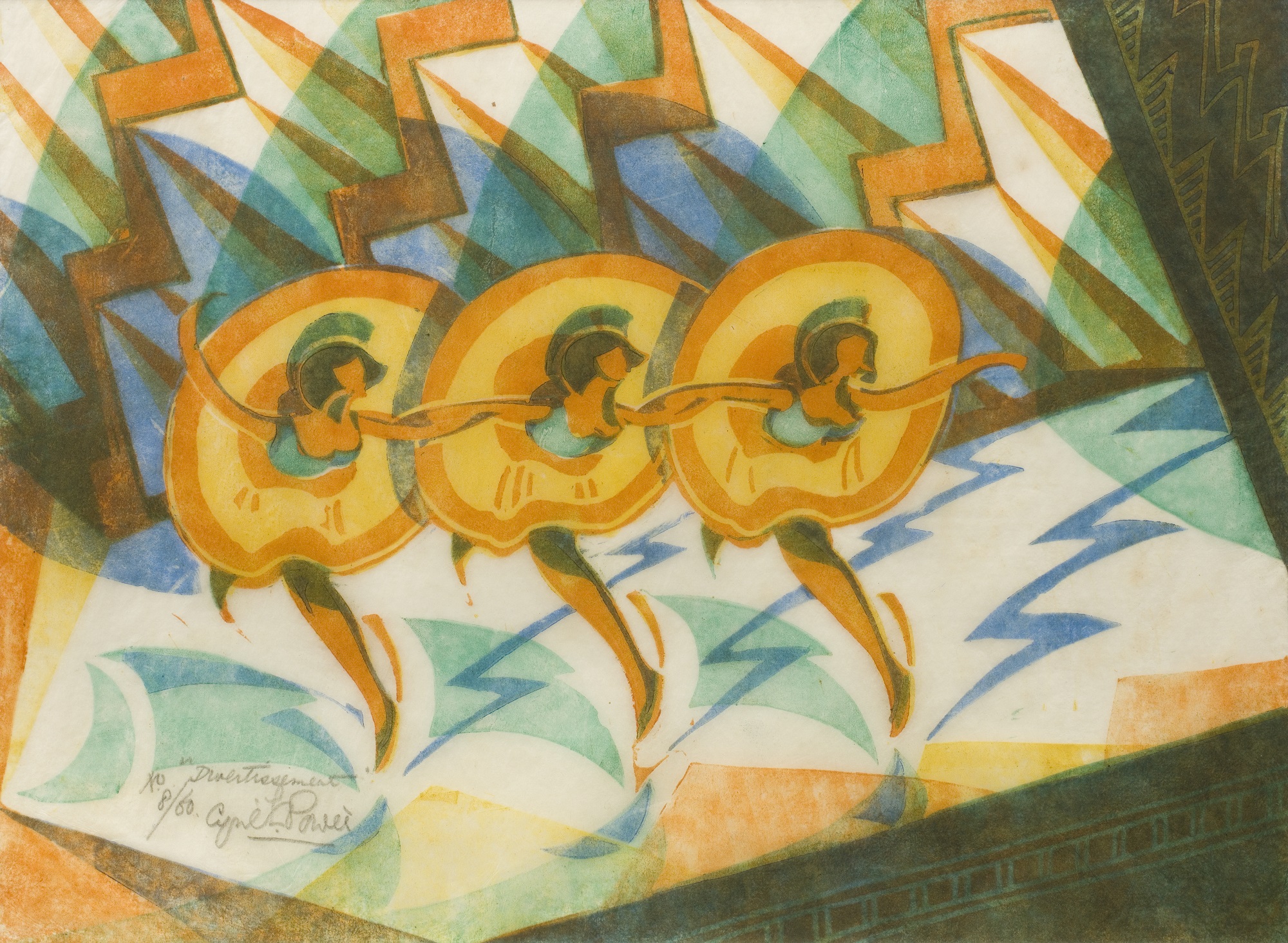 Vann, Philip, Rhythms of Colour and Light: The Linocut Art of Cyril Power (1872-1951), published by Lund HUmphries in association with Osborne Samuel, no.33, p.86

This study of stage light and shadow was inspired by the brilliant spectacle of the Ballet Russe performances in London during the late 1920’s.