After careful consideration of current global circumstances, The European Fine Art Foundation (TEFAF) has made the decision to cancel the in-person component of TEFAF Maastricht 2021, originally slated for September 11 – 19, 2021. The second iteration of TEFAF’s digital fair, TEFAF Online 2021, will run from September 9 – 13, 2021. 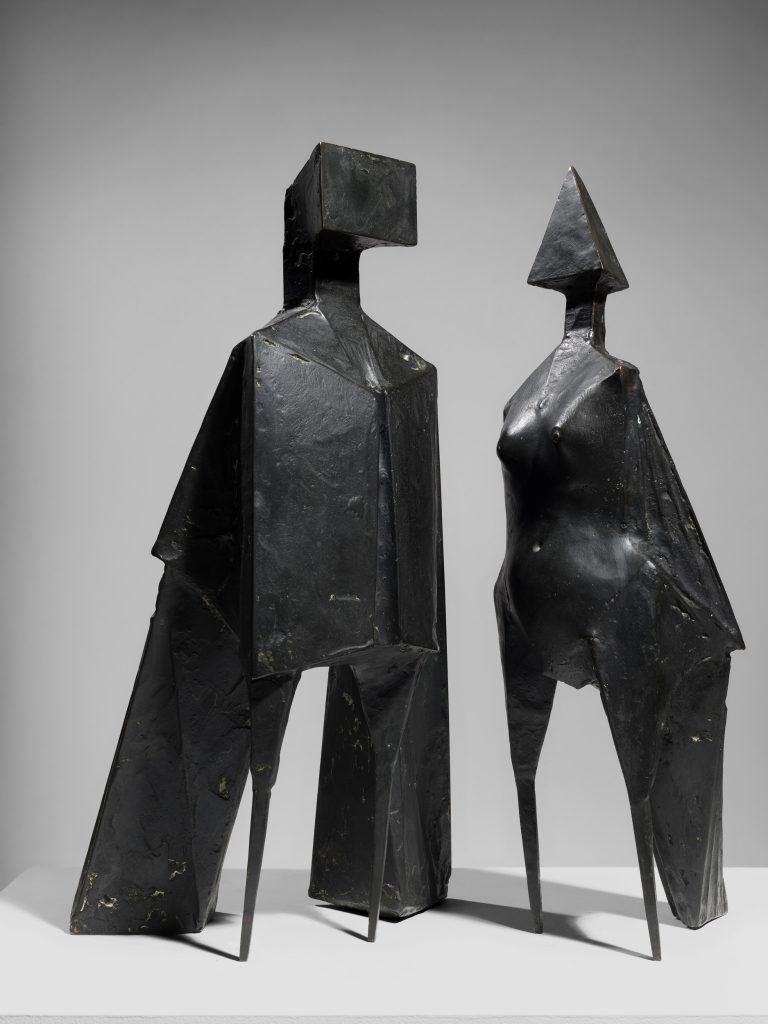 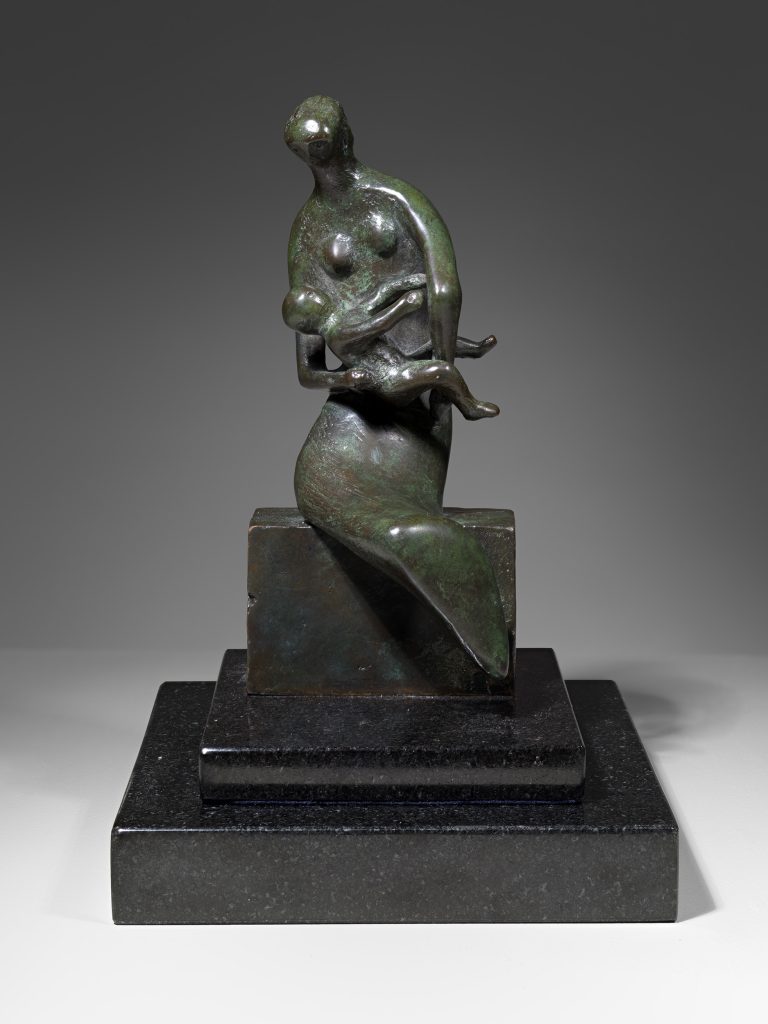 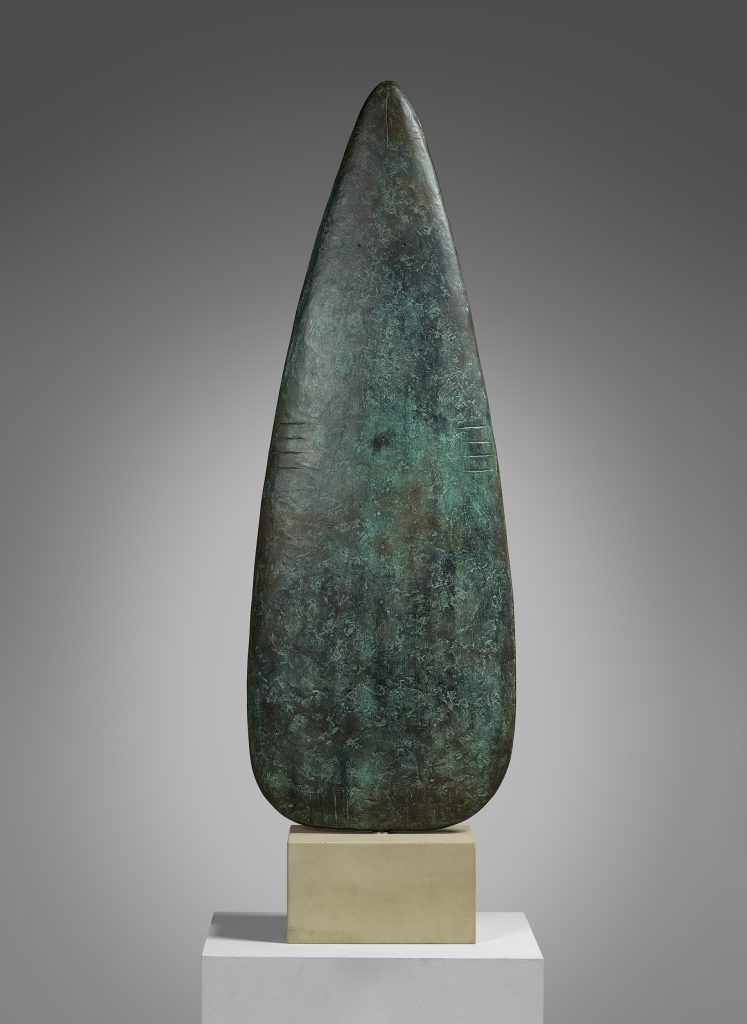 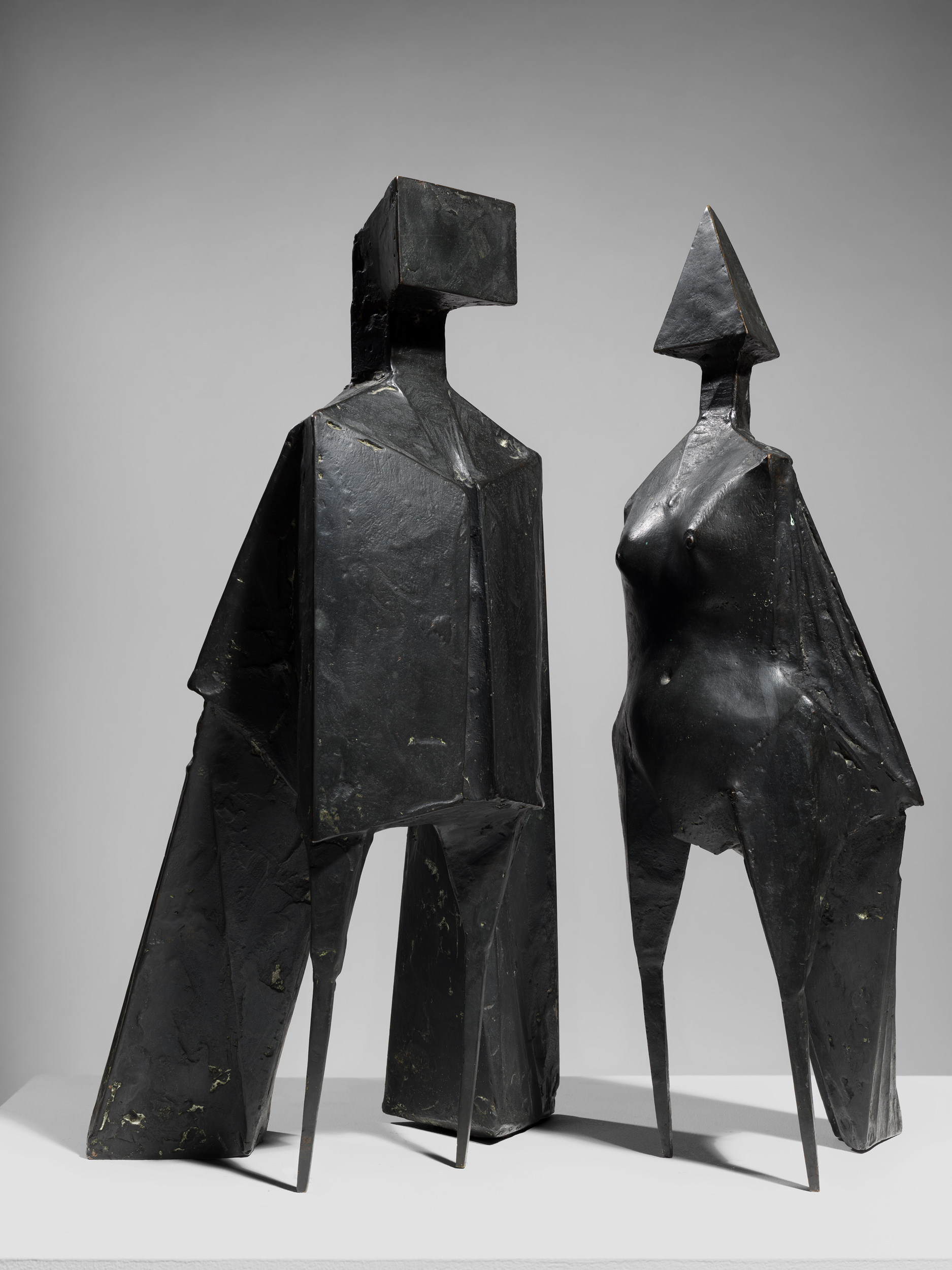 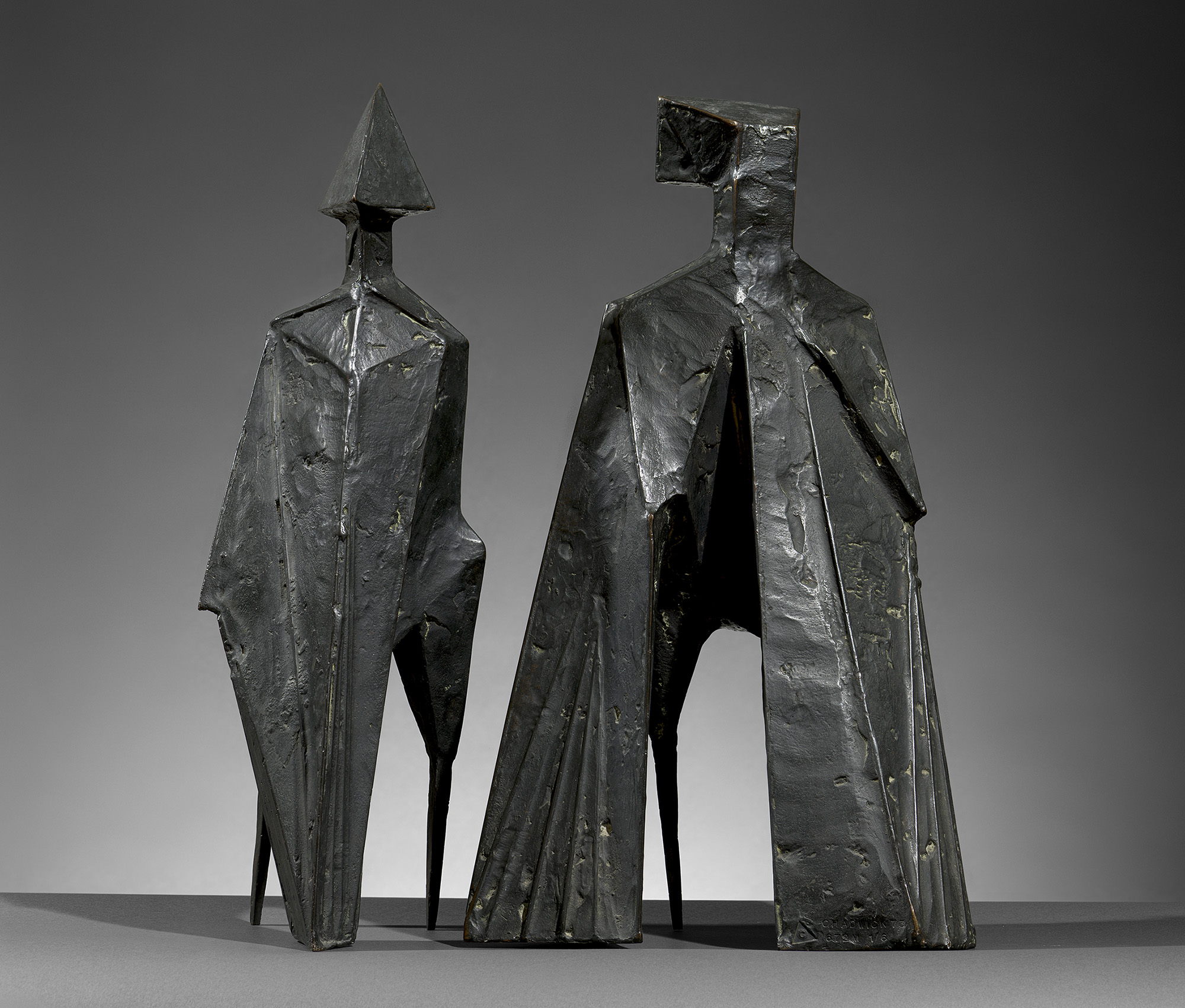 The winged figure, often presented as a pair, threads through Chadwick’s sculpture from the mid-1950s onwards. Early examples often danced in duet, their wings splayed in courtship ritual. In 1962, Chadwick transformed the idea completely, starkly abstracting its form to resemble aeroplane wings: Two Winged Figures, constructed from plate steel at an industrial works in Italy, and painted bright yellow and black, towered above the viewer.

If there was always a dialogue between the human and the machine, by the early 1970s Chadwick’s imagery had settled in favour of the former. Maquette V Two Winged Figures (1973) is, on balance, more human than otherwise. The wings, folded downwards, resemble robes. The female figure is clearly identifiable as such, broad-hipped and round-breasted, while the square shoulders of the male figure determine the geometric fall of his tunic and wings. But the head? So often in Chadwick’s sculpture this is where ambiguity concentrates. Heads resemble beaks, science-fiction jaws, insectoid mandibles, square television monitors. Sometimes they are reduced almost to invisibility, seeding doubt as to their sentience. In Maquette V Two Winged Figures, characteristically, Chadwick uses a cube and pyramid to denote difference. Proportionally in relation to each figure’s torso, and borne erect, they give cause for reassurance – yet the frisson of alterity persists. 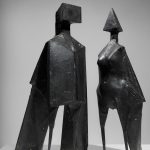 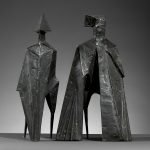 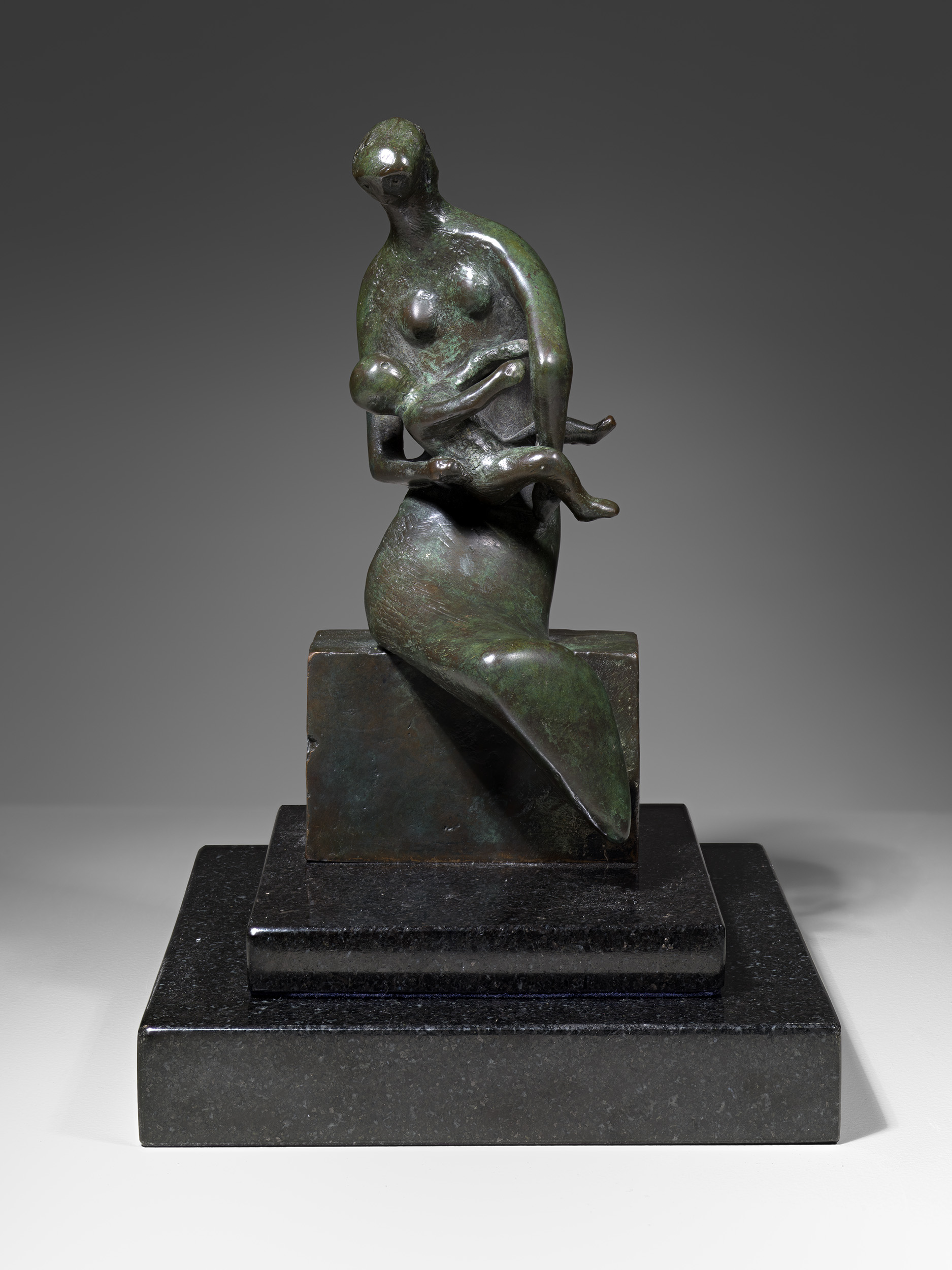 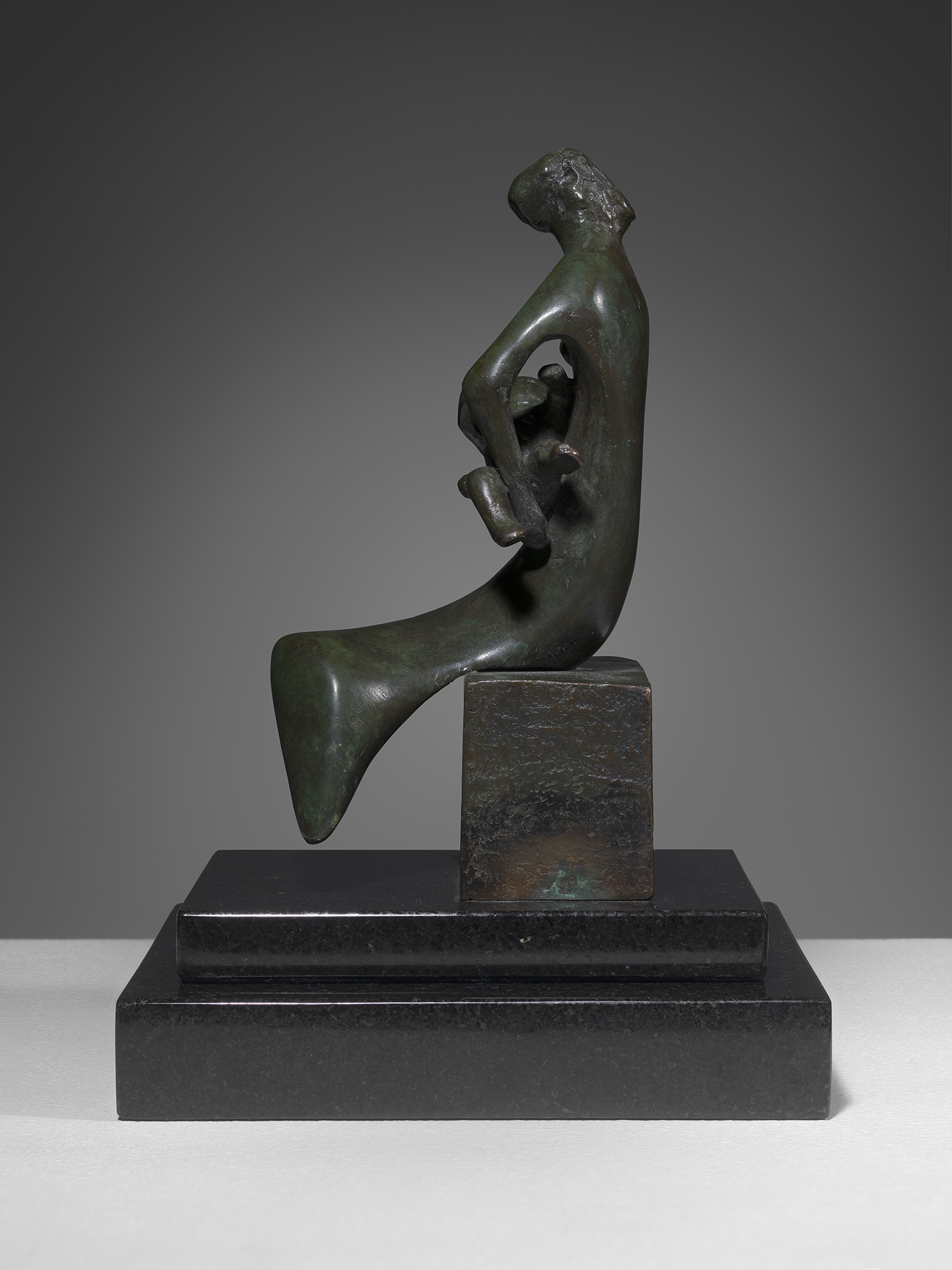 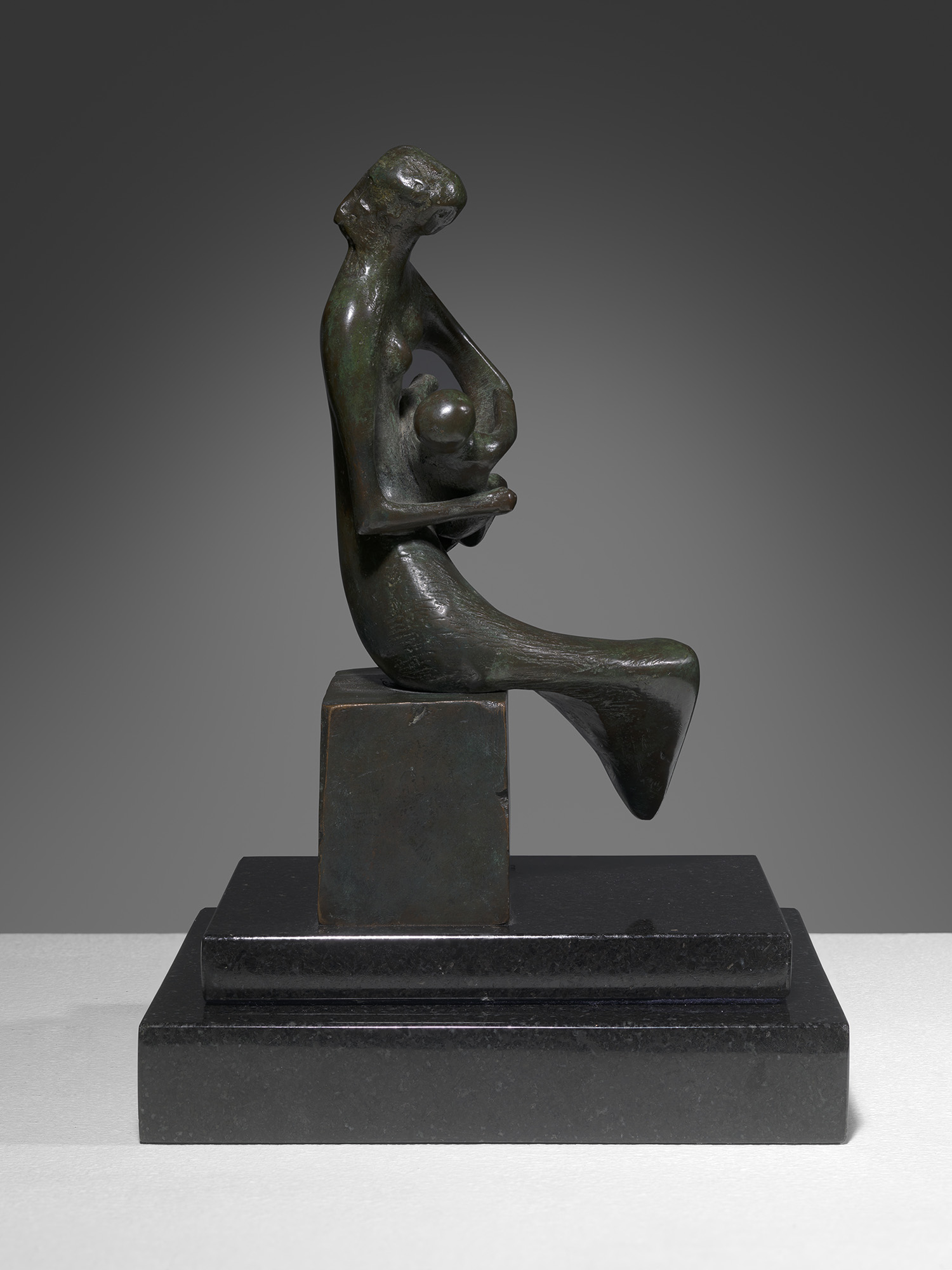 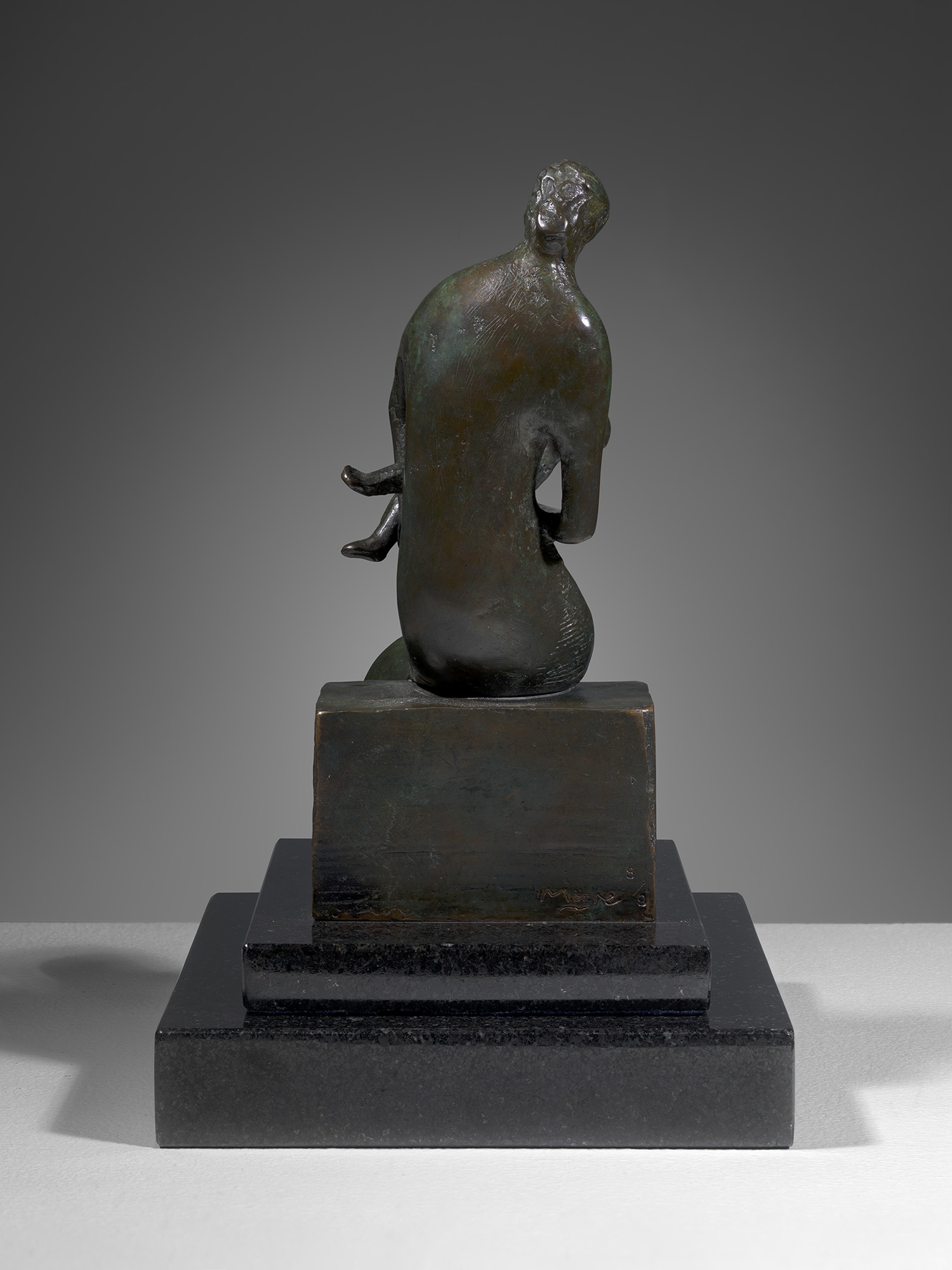 “From very early on I have had an obsession with the Mother and Child theme. It has been a universal theme from the beginning of time and some of the earliest sculptures we’ve found from the Neolithic Age are of a Mother and Child. I discovered, when drawing, I could turn every little scribble, blot or smudge into a Mother and Child.” ₁

Moore’s words, well known as they are, still prompt thought. As a young artist in the 1920s, he spent hours studying the collections of the British Museum in London and Musée de l’Homme in Paris. His drawings make clear the impact of these discoveries as well the agility with which he was able to transform his themes: moulding, caressing, even on occasions harrying his material. What emerges is one of the most profound studies, in the twentieth century, of a single subject: the mother and child.

A cursory selection, from across Moore’s career, demonstrates this breadth. A heavy-set, somewhat foursquare Mother and Child (1924–5), carved from green Hornton stone, contrasts with a translucent alabaster Suckling Child (1930), which tenderly fragments and abstracts from the human form. From the next decades we might choose Moore’s serenely Northampton Madonna and Child (1943–4), a Mother and Child (1952) in which a ravenous-beaked child is restrained at arm’s length, and the tiny, almost toy-like Mother and Child: Wheels (1962). If the 1960s proved relatively sparse, the 1970s saw a regathering of momentum as well as a scattering of Moore’s approach: from sculptural picture frames, reliefs and egg forms to homages – recalling Pisano, Rubens, ‘Paleo’ and the ‘Gothic’.

The distinction between the ‘mother and child’ and ‘Madonna and Child’ is significant. When Moore was approached to create the Northampton Madonna and Child (1943–4), he was initially hesitant as to whether he could produce a religious rather than secular work of art:

It’s not easy to describe in words what this difference is, except by saying in general terms that the ‘Madonna and Child’ should have an austerity and a nobility, and some touch of grandeur (even hieratic aloofness) which is missing in the everyday ‘Mother and Child’ idea.₂

Exploring the idea, Moore produced a series of maquettes. The proposed context and medium required a certain solemnity, reflected, in the chosen version, by the weight of drapery around the Madonna’s knees, and the breadth of her capacious lap, as she shelters the child. As Moore wrote, ‘I have tried to give a sense of complete easiness and repose, as though the Madonna could stay in that position for ever (as, being in stone, she will have to do)’. ₃

Such immobility provides a useful measure against which to compare studies of the mother and child unconnected to a religious context. Perhaps the greatest change, as Moore moved from the 1970s into the 1980s, would be an increased sense of intimacy and domesticity. Neither mother nor child is required to remain still. A child scrambles over its mother’s reclining figure, or balances on her knees, arms reaching towards her breast. In the drawings, Moore depicts the mother from behind, gently rocking the child, as it turns, or rests its head on her shoulder. These are informal poses, for which the most obvious precedent is Moore’s series of rocking chair sculptures, from the late 1940s to 1950.

Maquette for Curved Mother and Child (1980) continues this rocking theme. The mother’s body tilts as she cradles and rocks the child, such that her arms and the child’s outstretched limbs intertwine. The mother’s legs are cocooned in a closely fitting dress, emphasising the counterbalancing twist of her torso. A similar curve characterises the form of Seated Mother and Child: Thin (1980), where the child is supported upright on the mother’s hip. In Maquette for Curved Mother and Child, however, the arc is present in every aspect of its composition: from the mother’s neck to her spine and legs – even the child’s loose-limbed body – each element twisting in a slightly different direction. Moore’s maquette was enlarged in 1983, gaining in stylization if perhaps losing the immediacy of this diminutive version.

Moore acknowledged the impact that life may exert on an artist’s work, and how the birth of his daughter, in 1946, ‘re-invoked’ for him the mother and child theme. ₄ If this is the case, the fresh approach of the later works may indeed have resulted from the birth of his grandchild, in 1977. Maquette for Curved Mother and Child captures a joyous, carefree moment, witnessed as if at close hand. 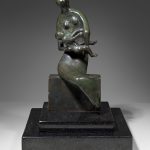 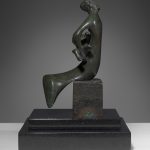 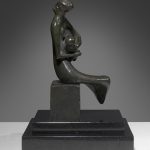 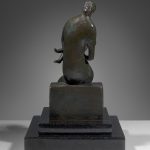 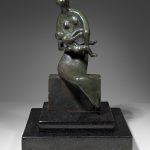 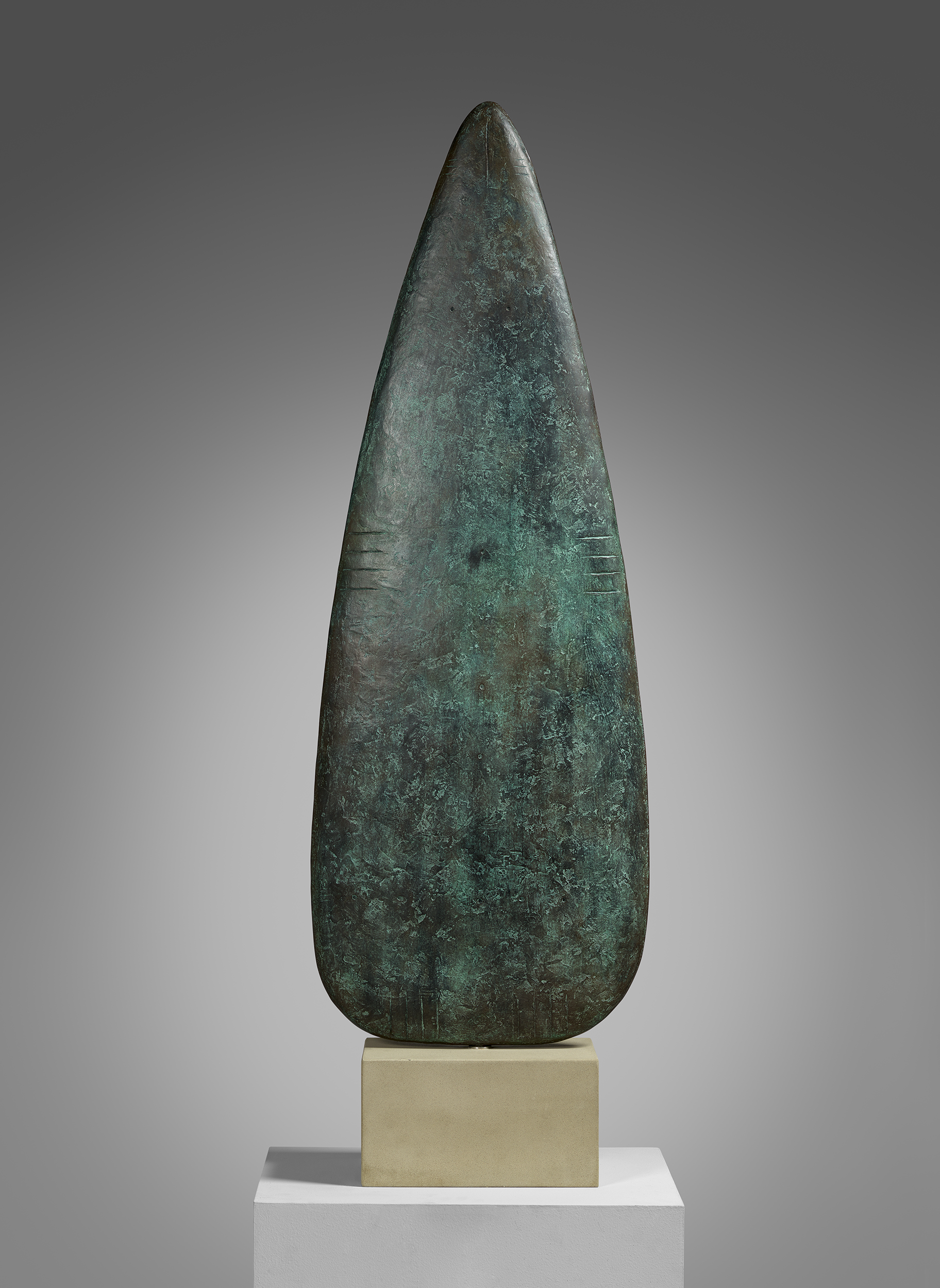 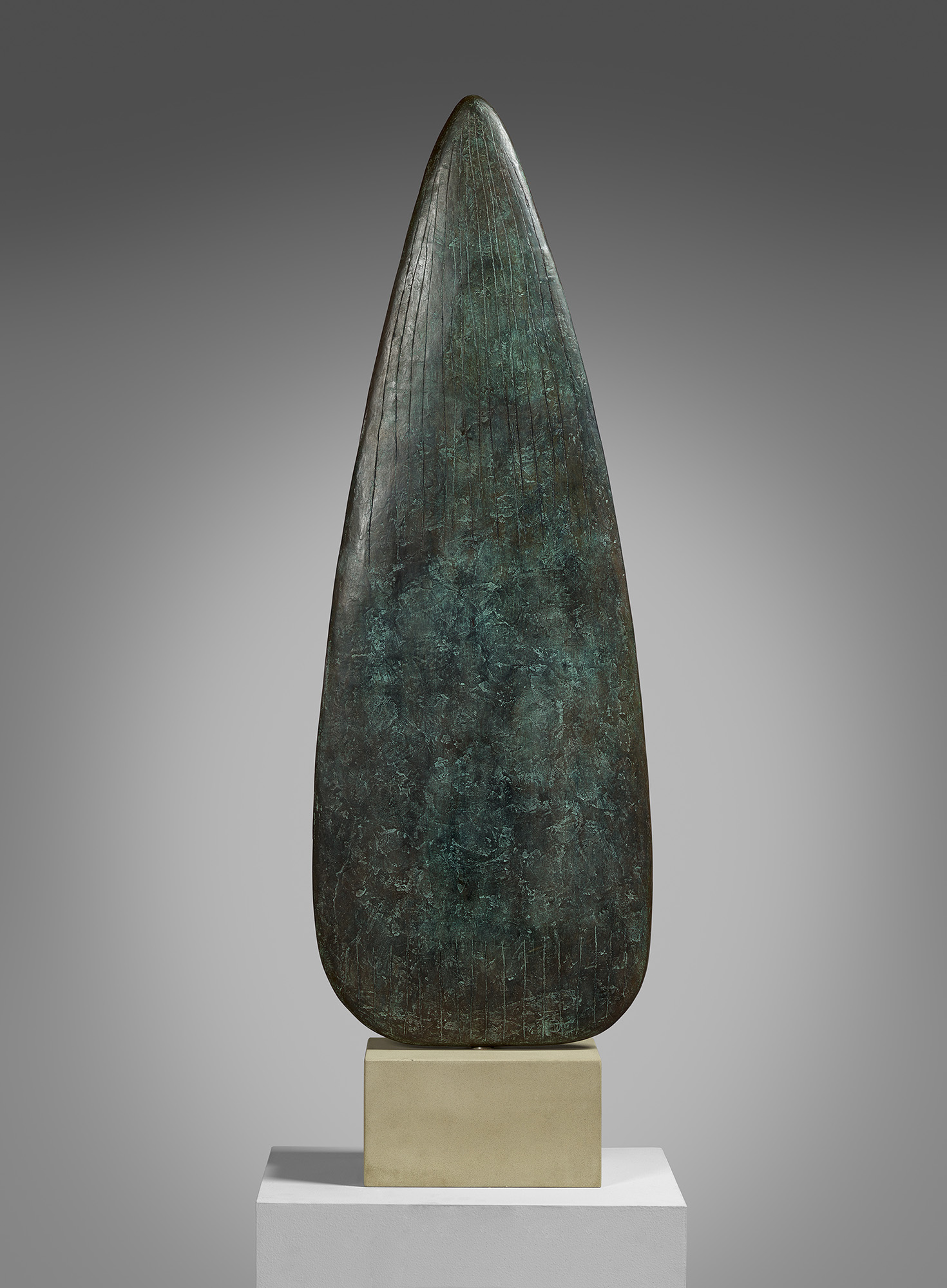 Encountering Leaf Venus 2, what does it suggest? Leaf, or goddess? Close to human scale, its blade-thin, verdigris form is marked by sparse, discreet indentations.

William Turnbull began to make ‘Idols’ in the mid-1950s: simplified structures whose totality could be grasped in a glance. Their presence was primal, evoking – though not mimicking – works from other civilisations. At the British Museum, Turnbull had studied Cycladic and African sculpture, as well as utilitarian objects, such as spoons, which possessed symbolic significance. His contribution to the radical exhibition ‘This is Tomorrow’, in 1956, was Sun Gazer, a mysterious ovoid on a pedestal. Turnbull amplified his intention in the catalogue:

Sculpture used to look ‘modern’; now we make objects that might have been dug up at any point in the past forty thousand years. Sculpture = totemic object. It can exist inside or outside architectural space.

In 1979, after a gap of seventeen years, Turnbull returned to making ‘Idols’ in bronze, fashioning a series of small masks, figures and torsos. The continuity with earlier work is evident, yet there is also difference. In sculptures from the mid-1980s onwards, such as Leaf Venus 2, sculptural weight and solidity have been replaced by slenderness: an audacious balancing of wafer-thin forms. Considering such works, David Sylvester recalled Turnbull’s question, ‘How little will suggest a head?’, invoking by comparison the artist’s emptied-out canvases of the 1950s, in which brush-strokes activate monochrome surfaces.

Amanda Davidson, in The Sculpture of William Turnbull, links the origin of Leaf Venus 2 to drawings of plants made in Singapore in 1963. 1. Turnbull related it to skateboards used by his sons; a jarring cultural appropriation, but correlating neatly with Leaf Venus’s form, its slim volume and gently curved surfaces. David Sylvester further suggested aircraft wings, which had been a visual constant during Turnbull’s four years as a wartime pilot in the RAF. 2. All are possible, indeed likely.

Sun Gazer (1959), as distinct from the 1956 sculpture of the same title, was sited outside Kingsdale School as part of an initiative by the London County Council’s Architect’s Department ‘to expose children to the most challenging and experimental manifestations of contemporary art’. 3. Sun Gazer relates directly to Leaf Venus 2. Horizontal rather than vertical, it is essentially a slim leaf form, with ridged and gashed surface markings, although the depth and legibility of this scarring is greater.

In Eugene Rosenberg’s photograph of Sun Gazer (1959), a girl in school uniform studies the sculpture. A young teacher looks on, while further pupils can be seen watching from open windows on the upper floor. We can never know what they were thinking, but the placement of the sculpture, against the modernist brick, steel and concrete architecture of Leslie Martin, is undoubtedly daring. Light, and the skilful black-and-white photograph, emphasise the strangeness of Turnbull’s sculpture – a space-age found object.
The challenge, with the smoother-surfaced Leaf Venus 2, is to register its presence through photographs: the sculpture’s surface lines and dots, ciphers across and around its slender mass, may all too easily be easily missed. Such markings subdivide the leaf, providing symmetry (dots in the centre, lines to the perimeter). Yet the effect, as with Sun Gazer, remains equivocal. Leaf Venus 2 is an object both self-sufficient and referential, clearly articulated and numinous. 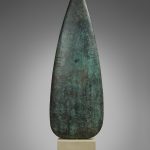 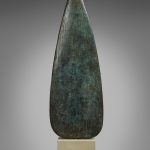