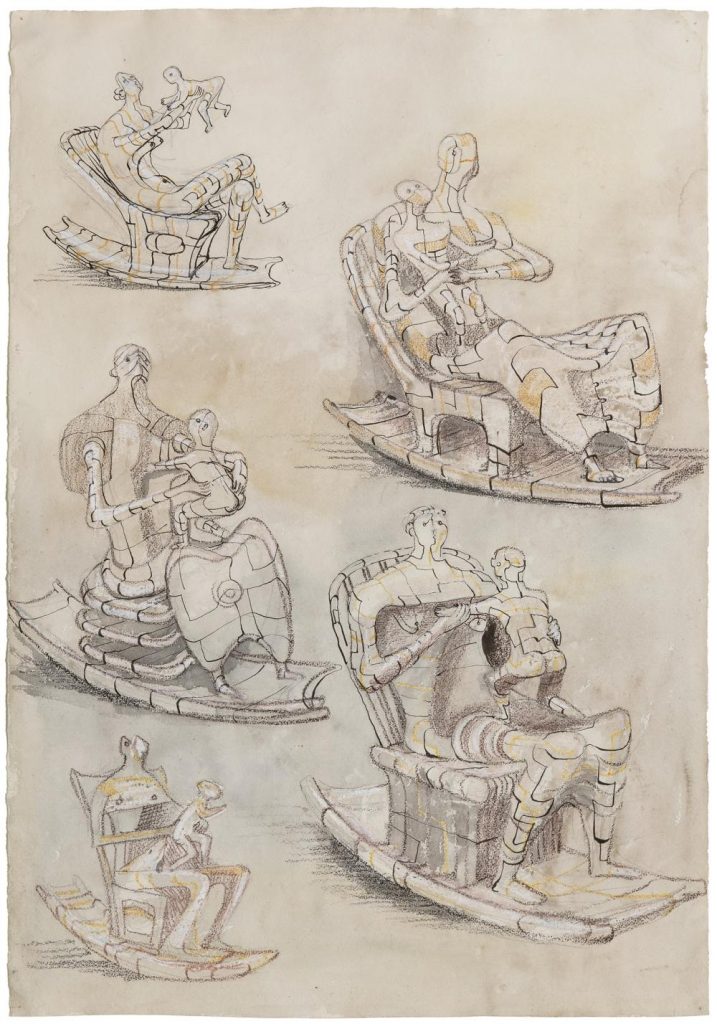 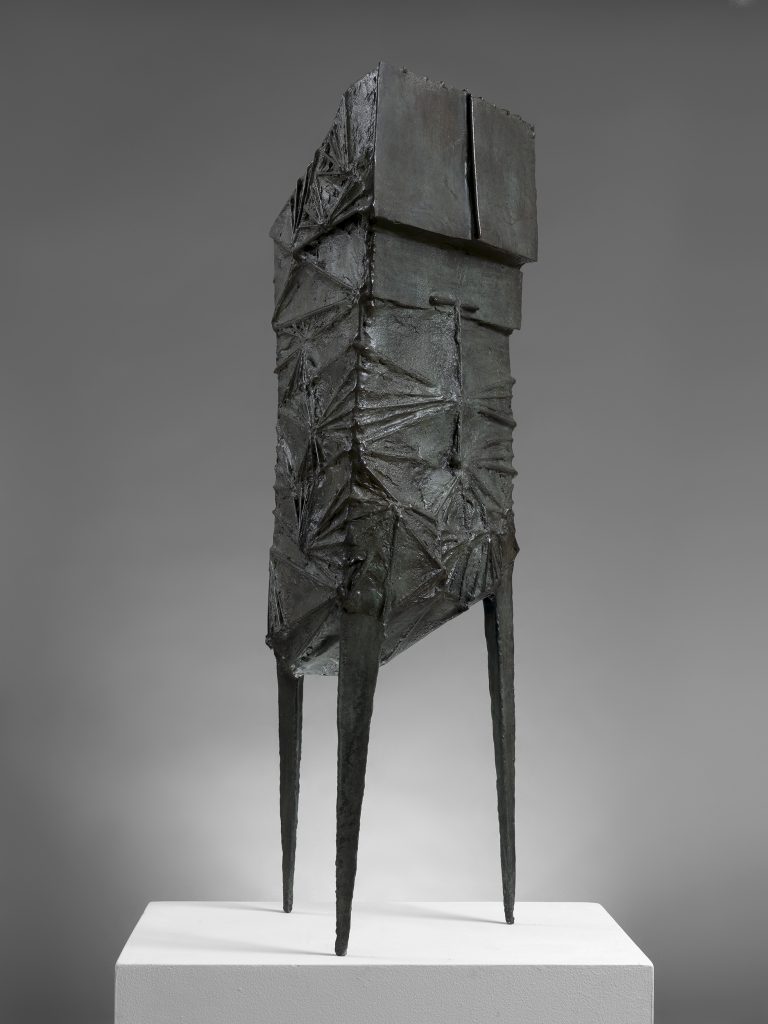 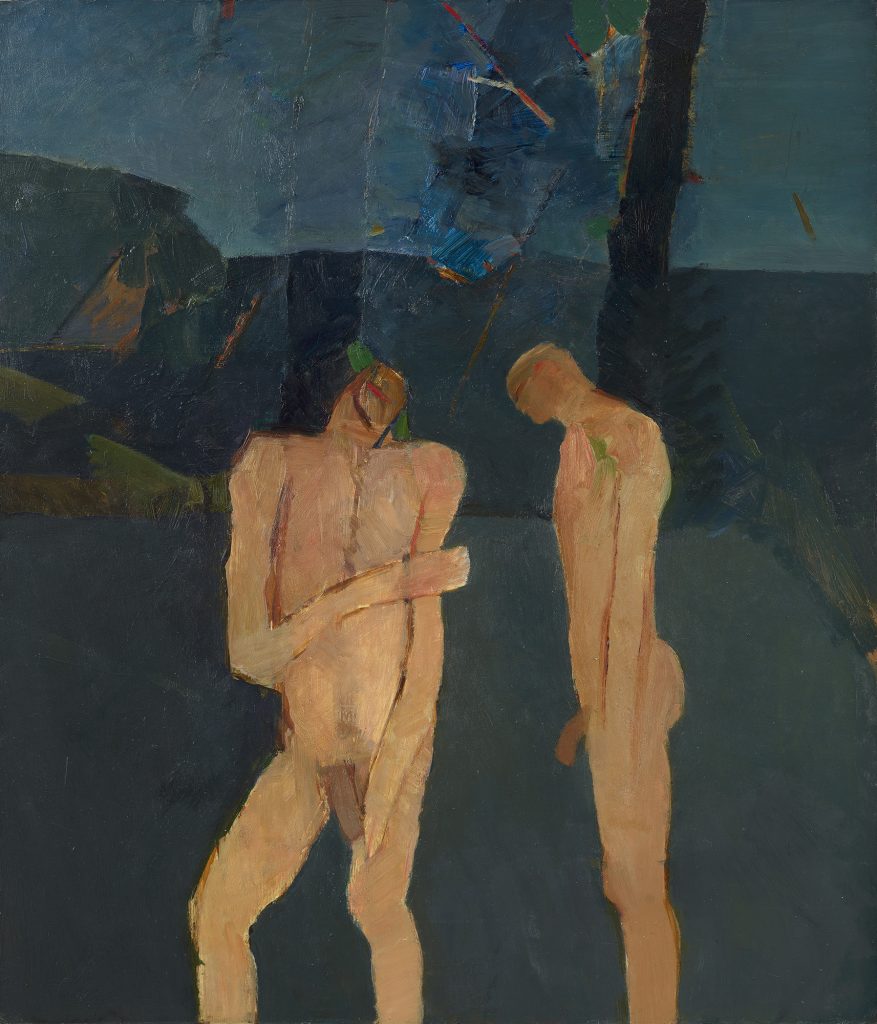 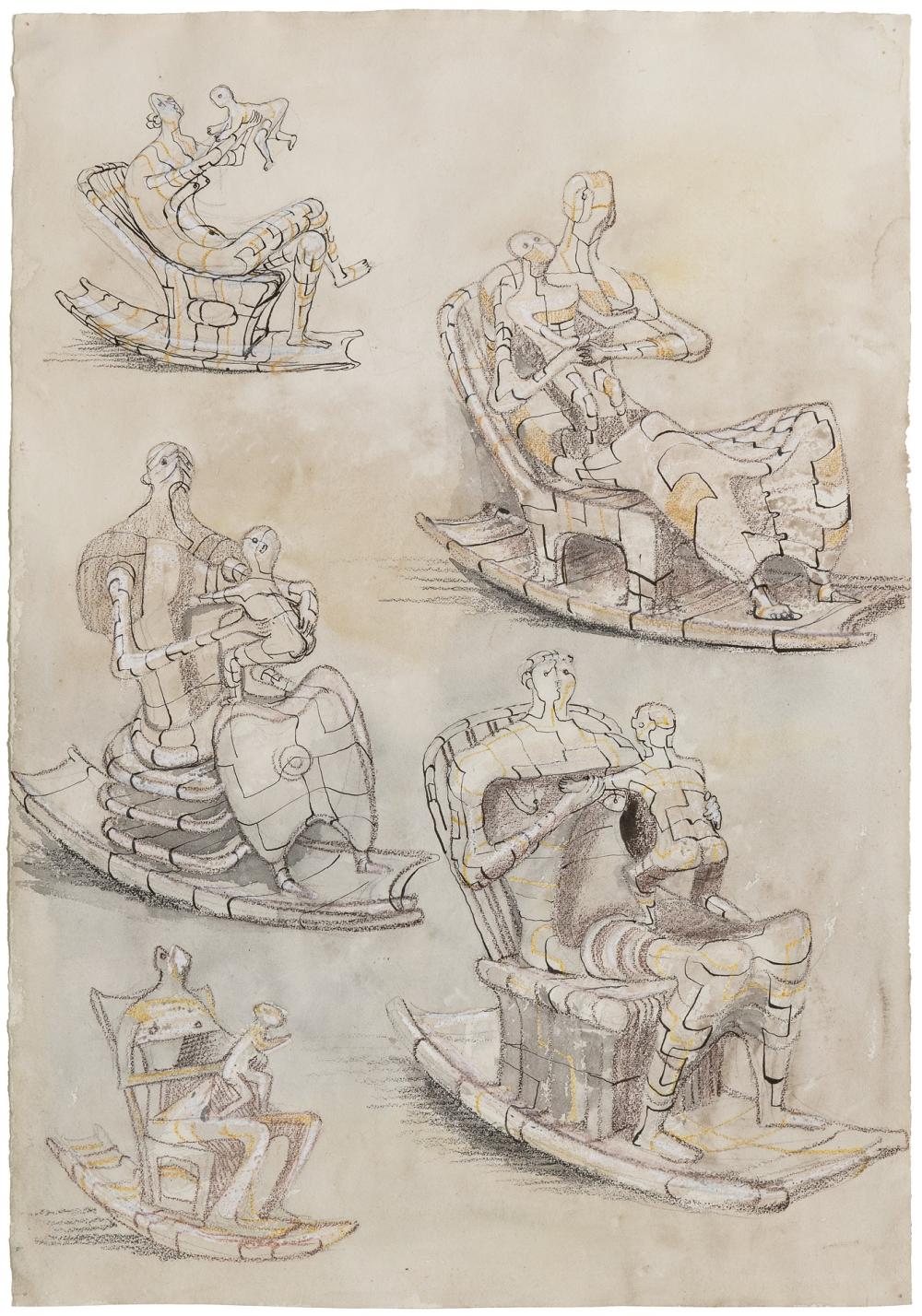 This work is registered in the Henry Moore Foundation archives as HMF 2515 and research file number 2020.38.

Rocking Chairs was purchased at Buchholz Gallery in 1951. The drawing was executed in 1948, four years before the bronze, Mother and Child on Ladderback Rocking Chair. In this drawing, Moore depicts five figure groups on rocking bases, with the
mother figure holding the child in various positions. Each group is three-dimensional, indicating that Moore conceived of the figure group as a sculpture from the beginning.

Moore’s series of sculptural rocking chairs was begun in 1950, when his daughter Mary, a much-loved and long-awaited child, was four years old. Although Moore had explored the theme of the mother and child since the 1920s, these new works showed a joy and tenderness born of experience. Will Grohman described them as ‘enchanting impromptus, the offspring of a lighter muse.’ 1 Their creation offers a glimpse both into Moore’s domestic life and the extent to which his personal and creative identity intertwined. Just as he experimented with how to balance the sculptures, so that they rocked perfectly, he would encourage Mary to think practically through play. For her eighth birthday party he produced a set of scales and invented a game to guess the weight of each guest. Moore’s estimates, perhaps unsurprisingly for a sculptor, proved accurate to within a few pounds. 2

Moore’s drawings provide a different insight. In the Rocking Chair Notebook (1947–8) he experimented with radically varied designs for the chair as well as the figures seated within them. The drawing, Rocking Chairs (1948), shows Moore adjusting the postures of mother and child so that each suggests an altered dynamic: from a protective embrace, to the joyous wriggling of the child held aloft, to an independent stepping forward, away from the mother’s arms. While mass is weighed through the technique Moore described as ‘sectional drawing’, dividing surfaces into jigsaw grids to highlight curves and planes, relatively little attention is paid to the chairs’ potential for movement: certain of the rockers seem implausibly flat. Instead, Moore lavishes his imagination on the figures. Grohmann noted how such variation developed across the span of the rocking chair series, although his words apply equally to this sheet of drawings: ‘heads became archaic knots, the bodies clothed skeletons, but the expression remains elated.’ 3

Rocking Chairs was bought in 1951 by the American philanthropist and collector, Vera List (1908–2002), from the Buchholz Gallery in New York. List, who a year later bought Moore’s Mother and Child on Ladderback Rocking Chair (1952), was an early and dedicated patron. In 1961 she and her husband sponsored the commission of Moore’s large-scale Reclining Figure (1963–5), in bronze, for New York’s Lincoln Center. 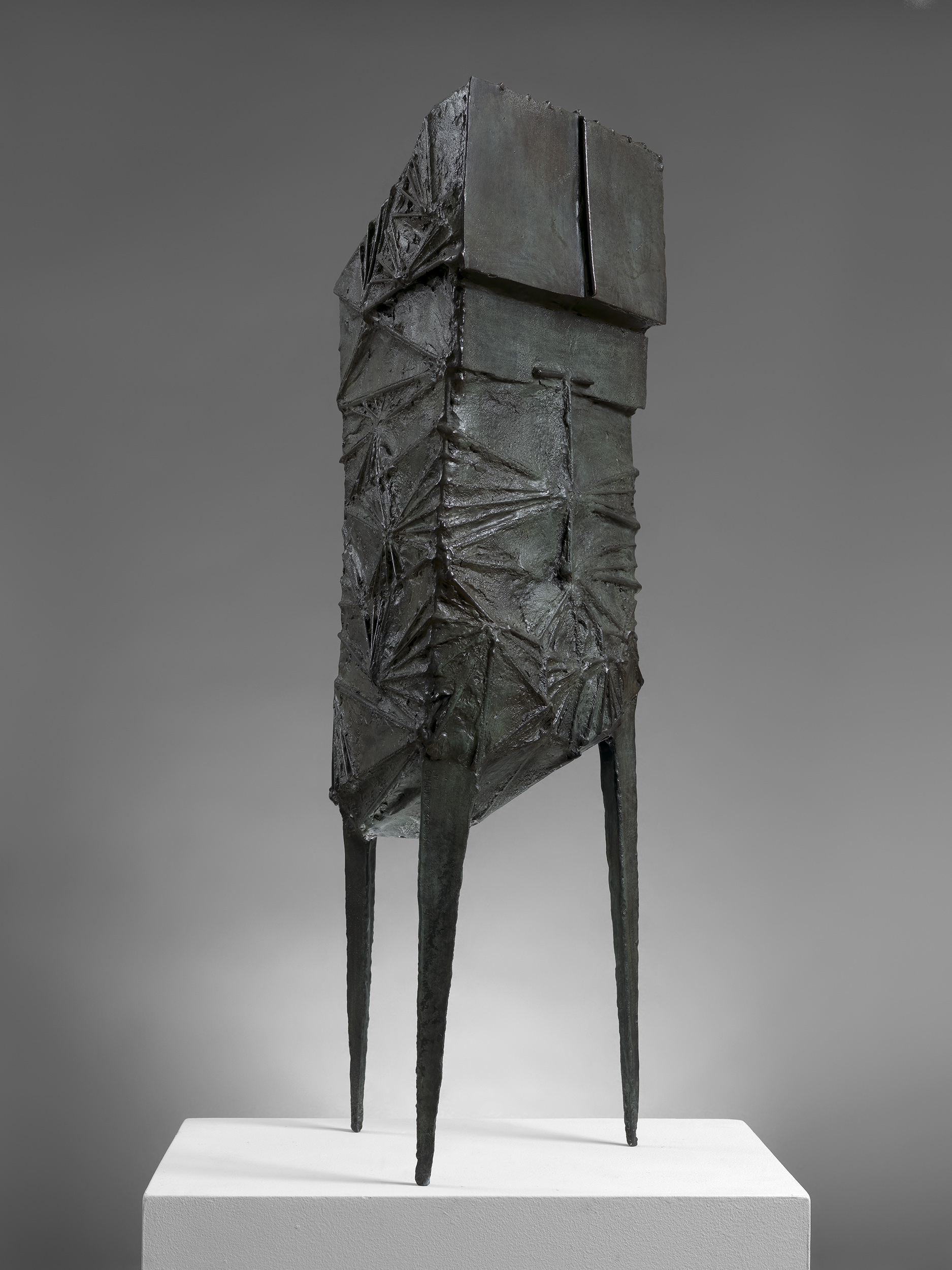 A study for the ‘Watcher’ series of 1961, executed in ink and watercolour on paper, is held in the collection at the Fitzwilliam Museum, Cambridge.

Other ‘Watcher’ sculptures in public collections, include the Berman Museum, Pennsylvania, the Sprengel Museum, Hanover and the San Diego Museum of Art.

In 1959 Chadwick began working on an iconic series of sculptures: ‘The Watchers’. These mysterious creatures stand in majestic isolation, even when they appear in triads. All marks of the individual have been removed from the figure, to create an image that is neither human nor animal, neither male nor female. Writing about The Watchers, Herbert Read dubbed Chadwick’s unique aesthetic as “the new image of man”.

Lynn Chadwick was interviewed by Cathy Courtney for the British Sound Archive and she asked specifically about ‘the Watchers.’

Chadwick answered, ‘it is my way of saying the same thing as the Easter Island figures are saying…. They’re not in any way, representative of anything. They are just shapes….. You see, the Easter Island things …. have this great intensity of … message, as it were and I wanted to do the same thing….. All I was aware of was that they ….satisfied me that I had done what I wanted to do, I wasn’t trying to do anything specific but it was just this way of having this intense feeling.’1

In 1959, Chadwick began a series of over forty sculptures titled Watcher. The earliest maquette angled its block-shaped head inquisitively, its torso curved in a gentle, questioning arch. More characteristically, the Watchers would appear erect and level headed, their gaze directed resolutely ahead.

Watcher VI (1961) was conceived in the same year that Chadwick began work on the group of three monumental Watchers, a cast of which was sited in Roehampton, overlooking the modernist architecture of the Alton Estate, by the London County Council in 1963. Like them, it inhabits a rectangular profile, upright and self-contained. Yet within this simplicity of profile there is abundant detail, subtly reinforcing the stance: no plane is left unconsidered. The head bears traces of horizontal seams, layered as a dry-stone wall. The torso is articulated with diamond facets. This particular Watcher twists its head, slightly: a receptor stilled in observation. 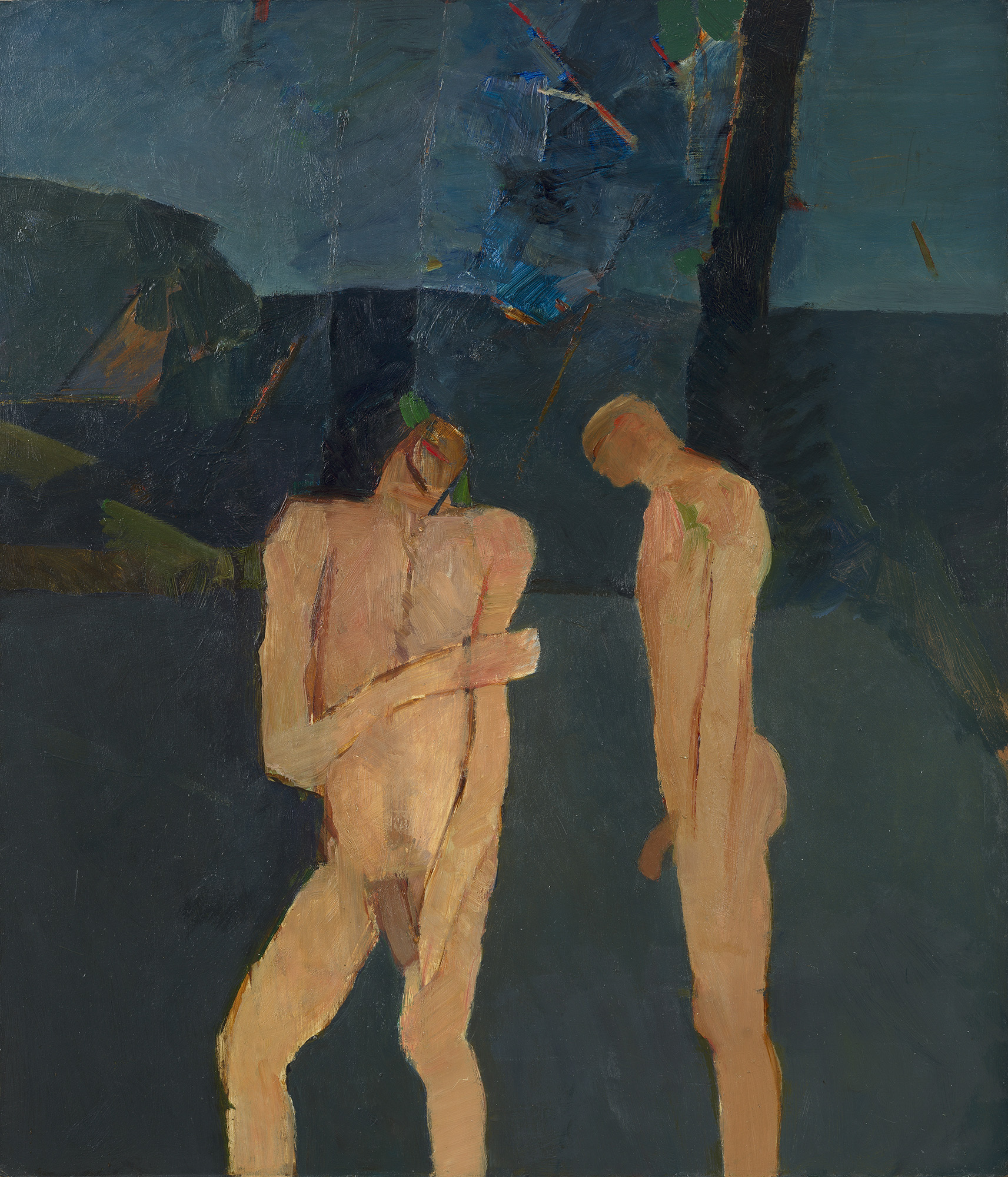 Private Collection, UK (purchased from the above)

In 1964 Vaughan bought a row of derelict cottages in the heart of the Essex countryside and set about renovating them. He created a small studio upstairs where he worked on small-scale oil paintings and gouaches at the weekends and during the summer months. Having nowhere to swim, he cleared a patch of land at end of the garden and excavated a waterhole. Railway sleepers interspersed with plants were dug into a shallow embankment to create a picturesque setting. The pool was more than a mere source of recreation. The theme of bathers had been a central subject in Vaughan’s work since the mid 1940s and now he began to paint friends reclining and drying themselves at the water’s edge in his garden. Two Bathers by a Pool depicts such a scene. Fellow artists were invited to visit Harrow Hill cottage at weekends. Patrick Procktor was a regular guest from 1966 onwards as was Mario Dubsky, one of Vaughan’s most talented pupils at the Slade. He recalled days spent making drawings of each other by the pool and Vaughan being at his most relaxed:

‘Keith and Patrick and I had some great fun. We held summer parties in the garden, swimming naked of course, and drank freezing drinks in between skinny dips in the pool. Mrs. Vaughan sometimes sat knitting in her deckchair, at the other end [of the garden], keeping a watchful eye on us. God knows what she thought of me and Patrick larking around after several gins. But we also had some serious discussions well into the night, about painting and literature. Keith would tell me what I should be reading. Patrick and Keith used to talk endlessly about the ways they could turn their personal experiences of life into art.’

Procktor also brought with him the filmmaker Derek Jarman who, apparently, loved nothing better than to strip down and dive off the railway sleepers into the pool. The BAFTA-winning documentary maker Peter Adam visited along with his illustrious friends, including David Hockney, the grand master of the pool-painting genre. He recalled them all swimming and wallowing together in Vaughan’s garden pond – a far cry from the glamorous Californian pools he was used to:

‘David was living in Los Angeles but on his annual visit to his family in Bradford, (his mother still thought that it was the sun that bleached his hair!), he always took care to visit Keith. Once we drove in his new Morris Minor convertible to Essex. We splashed about in his little natural pool…All that amused Keith greatly.’